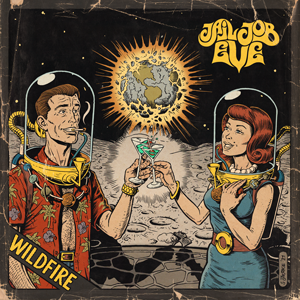 Since 2013 Jail Job Eve has become an indispensable part of the German rockstages. Whether festival stage, live club or rustic rockmusic venue – for more than eight years now the five musicians from Osnabrueck, Germany, have been playing their way across the country.

After their first release “Bird of Passage“ in 2015, the band signed a contract with MiG – music in 2018, the label that, among other things, distributes the legendary “Rockpalast“ recordings of the German TV- and radio-station WDR and with bands such as Siena Root, Bröselmaschine and Wucan, the label has signed in the field of retro rock under contract.

Jail Job Eve’s album “The Misson“ received recommended reviews in the music press throughout Europe, and the band thus earned the reputation: “the hope of the national blues rock scene“ (eclipsed Magazine, Germany).

With their upcoming release “Wildfire“, Jail Job Eve is once again setting new standards. The album, recorded entirely live, confirms the band as a finely balanced rock machinery. The music is much harder, more experimental and coarser, while the lyrics deal offensively and aggressively with the most important ideological issues of our time, such as climate change, sexism, LGBTQ + rights or the responsibility of art and culture as a mirror of society and an instrument of peaceful protest. For example, the first single “Lost“ is a song about female empowerment and therefore an energetic, feminist statement to sing along to.

The band‘s audible role models include Rival Sons, Blues Pills, Greta Van Fleet, but also the classic rockers of Deep Purple or the omnipresent ubiquitous instance Led Zeppelin. The clearest fist in the face of the listeners still is Victoria Semel, who virtuously puts her heart and soul into her singing. Benedikt Schlereth, who plays his way through the album with his distinctive guitar sound coined by the grand repertoire of rock history, Jens Niemann, who lets his Hammond wobble sonorously and suffer shriekingly, as well as Tim Beckers on bass and Josef Röhner on drums, who create fulminant, cast-iron floors under their bandmates.