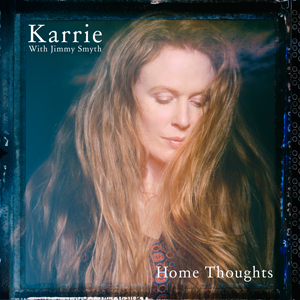 The idea was to record and perform established tunes by their favorite artists: reflecting the Zeitgeist, and using only the ‘bare bones’ instrumentation, thus highlighting Karrie’s remarkable voice. The result is a timeless collection of well-known songs transformed into beautiful stripped-down folk.

“At first, Jimmy and I did this as a socially distant, social media experiment,” says Karrie. “But as it took ‘legs’ of its own, I realized that the combination of our aesthetic, along with the reaction from people in lockdown, pretty much defined what an album is for. It’s a reflection in music of a certain time and place in our lives.”

Jimmy Smyth: “During lockdown we thought it would be fun to perform songs that we love, with minimal instrumentation – just Voice, Guitar and Banjo – and put them up on Facebook as an artistic response to the despair and isolation people were experiencing. A simple Idea. With the best of intentions. It might help: It can’t hurt.”

The songs were recorded remotely, with Karrie recording direct into her iPhone on her farm in Kerry and Jimmy with his guitar and banjo in his studio in Dublin. Rod Stewart’s ‘You Wear It Well’ was the start, slowed down into an almost unrecognizable gentle folk song. After that, they simply chose songs they both loved, with the discussions, the recordings, the videos, all taking place in the virtual space. Cue new versions of classics by the likes of Clifford T.Ward, Rickie Lee Jones, James Taylor and Elton John.

With these initial covers getting a hugely encouraging response on social media the duo soon followed with versions of Bacharach/Costello, Brian Wilson, David Bowie and Mark Knopfler this time with acoustic guitar. As the tracks continued to resonate with people, the online views continued to grow with over 250k views and the album “Home Thoughts” was born. “It was overwhelmingly and very inspiring” says Jimmy. “Karrie‘s amazing voice immediately resonates and a project like this demonstrates a shared understanding of just how powerful and healing great, honest songs, coupled with true talent, can be.”

‘Home Thoughts’ started as a small idea followed through with love, dedication, and talent, and, fueled by the enthusiasm of listeners – became a truly positive process in a time of crisis.

Born in Killarney, Co. Kerry, Karrie released her debut album “Jelly Legged” in 2014. Two of the singles had heavy rotation on the National Broadcaster, RTE, which led to invitations to tour with the likes of Declan O’Rourke, Mick Flannery, and Mary Coughlan. Her second album, ‘Perpetual Motion’ brought further acclaim, including from fellow musicians like Sharon Shannon who said ‘Karrie is the Irish Joni Mitchell’, Rumer, who invited Karrie to open her 2018 tour, and Mary Coughlan, who has recorded Karrie’s song “Elbow Deep” for her upcoming Album.

Since then, Karrie has had three Top 5 singles in Ireland, all of which will be included in a soon-to-be-released album. The tracks “I Don’t Hear You”, “I Love You The Most” (both Number One on the RTE Airplay Charts) and “So Long Ago” (Highest chart position: Number Three) were all produced by Jimmy Smyth, cementing their musical partnership.