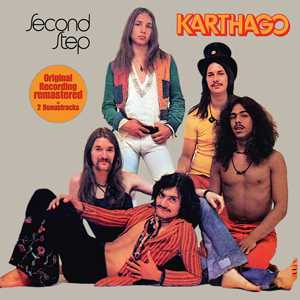 The story about KARTHAGO’s “Second Step”
KARTHAGO, the music scene and Berlin have gone through many changes in the time between the release of “Karthago 1” and the production of “Second Step”.

We were all looking for something, and we learned a lot. It was almost a routine for us to drive along the transit routes between West Berlin and West Germany.

Communes in the countryside who loved music were our strategic linchpins so that we could be with like-minded people. Here we talked endlessly about music, concerts, record labels, freedom, society and alternative ways of living. Whenever we were in the mood for jamming, we jammed, be it day or night.

We did gigs all over the country. That’s how we got to know (West) Gemany and landed our first gigs in neighbouring countries. Wherever we performed, to us it was a bit like exploring the world.
We acquired musical know-how and increased our standards. The choice of instruments and brand names became a credo of our own creativity and individual power of expression – as long as they were useful to imitate a trendy sound of one of the top stars or to create something unheard-of.

Our standards increased not only as regards the musical equipment we were using but also as regards our musical attitude that was changing during that time. We realized all of a sudden that only those who appeared as composers on a record were the ones who would make good money.

So all the band members started to compose their own songs and teamed up with different songwriters.

The endless concert tours helped to weld the “gang of eight” together or to build tension and have quarrels, always depending on the amount of success we achieved or the mood everybody was in. Soon the band suffered its first casualty of rock ‘n’ roll: drummer Wolfgang Brock couldn’t deal with the circumstances anymore and left the band.

He was replaced by Norbert „Panzer“ (“Tank”) Lehman. C+M Hudalla’s promotional photo showing both drummers – Wolfgang about to leave and Panzer having become a member of the band – was quite sensational at that time.

Back then, everyone was keen to jam with other musicians. Thanks to word-of-mouth a musician could turn into a hot tip on the scene. Joey Albrecht was already quite a celebrity in Berlin. People loved to jam with him.
And Panzer who was a talented and ambitious drummer was given Joey’s phone number by Stephan Diez and Hans Hartmann who were very well known on the progressive Jazz scene. After a long odyssey, Joey and Panzer finally had their first jam session in the legendary rehearsal rooms at Wrangelkaserne in Berlin.

Although being on the same wavelength in terms of music, it took a while until Panzer who had already jammed with individual band members was rehearsing with the band KARTHAGO as a whole. The band was impressed by his drum playing. Even Wolfgang Brock stated that KARTHAGO and Panzer would be a much better match – and left KARTHAGO of his own free will shortly after that.

Compared to his predecessor, Panzer had very different drum styles and a distinct personality taking the band on a high-flying trip in the first months. At festivals KARTHAGO was way ahead of the pack when it came to the response of the audience – the sound and energy that came from the musicians on stage was gigantic.

Due to disagreements with the management, producers and record label releasing one record per year (which had been our set objective) turned out to be more difficult than we thought. We had to wait for two more years until we could produce “Second Step” in cooperation with the new Hudalla management.

In the course of making this record the band members soon were competing with each other to decide who would compose and contribute own songs to the album. This was also an important milestone in the band’s history.

There’s no point in arguing about which album – “Karthago 1” or “Second Step” – was more of a Krautrock album. Both of them were recorded by a band that was influenced by US mainstream music but KARTHAGO was a child of their time – the band’s roots were obvious and are therefore interesting to music lovers.

In comparison to our first album we had much more time to prepare “Second Step” which derived great benefit from that fact. We decided to produce the record in Hamburg which back then used to be the Mecca of the musical scene. We chose the Windrose Studio with Thomas Kuckuck as producer who was a legend in sound engineering. Already being a band of renowned reputation within the German music scene, befriended musicians showed up during the recording sessions. That’s how Inga Rumpf and Ringo Funk, for example, came to sing backing vocals on the song “Oberbaumbrücke” – without being explicitly mentioned on the album sleeve.

We had chosen the studio, as well as the producer and we pushed our claim of the recording budget – to sum it up: We had prevailed against the record company which was a wonderful act of self-fulfilment, in times when usually musicians could be happy if they received an advance payment or a royalty statement, not to mention seeing the money actually being transferred to their accounts.
SECOND STEP – The tracks

The Opener, „Pacemaker“, was also the live shows’ opening track. It was a technically demanding, furious instrumental and originates in the tradition of the musicians from Berlin to check each one’s abilities out while jamming a fast shuffle.

„I Don‘t Care“, so the band’s working title, the 6/8 number with its groove and breaks, the wide stereo panorama sound of Joey’s guitar and Ingo’s snotty Hammond M3, the solos and pulsating bass, Joey’s vocals and the background singers featuring Freya Wippich, may remind some of Joe Cocker’s album “Mad Dogs and Englishmen” but is completely Made In Germany and totally KARTHAGO. In Germany at that time, Ingo’s exceptional organ skills belonged to the best in funky Hammond sounds. Even a fellow musician like Jean-Jaques Kravetz who was in Frumpy and later Atlantis had his difficulties being able to keep up to Ingo’s rhythms.
“Don’t Send Me Your Money, Send Me Your Heart”, another musically appealing song by Joey, lyrics written by T. M. Fabian, was a brilliant vocal piece. Joey’s guitar is accompanied by Ingo’s Fender Rhodes’ sounds highlighted with an angry dynamic fade-out and carried along by Gerald’s masterly played bass.

“Wild River”, another track penned by Joey, evolves into a billowing stream of swinging instruments. Ingo works the Rhodes and the Hammond, Gerald plucks his double bass in the jazzy part in the middle, all carried and brought up to speed by Panzer’s superb drum drive. A diversity of feelings expressed through emotional waves and a variety of stylistic elements – a flowing musical masterpiece. An absolute experience in sounds is the subtle and unique phasing of the Hammond organ which was done with the Lesley speaker. Combined with a Hammond the rotating and in their tempo assessable low and high pitched loudspeakers will produce a unique and distinctive sound even today. Thomas Kuckuck was a true master in his field. He succeeded to transfer this special momentum in a way that it virtually unfolds to become three dimensional even though at that time the only possible sound was stereophonic.

Ingo Bischof composed “Crosswords and Intermissions” in collaboration with lyricist Lee Gates who had got stuck in Berlin with the cast of the musical “Hair”. This was his first vocal track to be recorded on vinyl and not only he demonstrated his virtuosity on a concert grand but also, for the first time, used a mini moog, in a very gentle and melodious way. The whole song is flowing in harmony due to Tommy’s percussion sounds that have never been heard like this before.

Ingo’s second song for the album, “Oberbaumbrücke”, carried by the organ and the concert grand is like a musical sketch of the life in the city of Berlin at that time. You could meet them all there – the Hippies who wanted to go to bed stoned, the Rockers with their beer bottles, Turks, Italians, Yugoslavs as well as construction workers who were already on their way to work. Actually, all was functioning pretty well with – and without each other.

A track like Tommy Goldschmidt’s “Lamento Juvenil” was matchless in an album recording of a German rock band at that time – in fact it is so unparalleled that the extra statement on the cover of the album is completely justified: The track is sung in Spanish, a vital Bossa Nova that comes in style with lots of percussion.

In presenting the shortest vocal track of “Second Step”, “California Gigging”, Gerald Hartwig celebrated his first ever composing and singing debut on a record. The whole track is groovy and sunny, carried by rhythmic wah wah guitar and clavinet sounds, a game of questions and answers by Ingo and Tommy which ends with Timbales and Clavinet.

According to the eight original tracks of the album this compact disc offers two bonus tracks: Chuck Berry’s classic “Johnny B. Goode” and Albrecht’s arrangement of “Going Down” by American singer and songwriter Don Nix. Both songs were favourite encores at KARTHAGO’s shows, and the production took great care in keeping the live character of the two tracks. The band was really proud of their version of “Going Down”. And even members of the Jeff Beck band who had also recorded their own version, were enthusiastic about KARTHAGO’s arrangement and presentation.

The two covers were chosen since “Second Step” did not contain any other songs of around three minutes length that would have been suitable for singles. Nationwide radio and TV stations at that time demanded versions like this. Nobody wanted German tracks then, the bands’ own English composition were too long, thus the covers. And the strategy led to a success: KARTHAGO was booked by the nationwide TV show “Disco 74”, as well as for shows like “Musikreport” and “Musik Today”.

With the TV appearances and the album “Second Step” KARTHAGO had their final breakthrough in Germany. Two leading music magazines of that era, “Musikexpress” and “Popfoto” picked KARTHAGO from Berlin for “the most promising band of the year”.
All of the music media people liked the band – critical magazines like “Sounds”, mainstream music press like “Musikexpress” and “Pop” over to teen mags like “Popfoto” and “Bravo”. KARTHAGO had finally made their way into the premier league of Germany’s bands.

The era of “Second Step” ended when Gerald Hartwig and Panzer Lehmann left KARTHAGO. They were being replaced by drummer Konni Bommarius and bassist Glenn Cornick who had before been with Jethro Tull. With them a new era began, the era of “Rock ’n’ Roll Testament”.

Bonus-Tracks:
Johnny B. Goode
Going Down