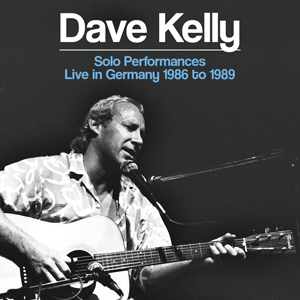 If there is such a thing as a British ‘blues pedigree’, then Dave Kelly’s sets the standard. Kelly is a blues craftsman – a journeyman who has served his time with the best.

In New York he jammed with Muddy Waters.  He became a friend to Howlin’ Wolf and John Lee Hooker, who both felt the benefit of Dave’s playing in their touring bands.  It was Dave’s big sister, the late Jo-Ann Kelly, who first opened his ears to the blues, although his passion for rock and roll – and especially the work of Buddy Holly – remains intact.  In 1967 he joined The John Dummer Blues Band.  After three albums and a solo project he continued to polish his style and technique throughout an adventurous career with some of Britain’s finest players.  When The Blues Band was formed in 1979, the post of slide guitarist and joint vocalist was a foregone conclusion – and bringing his friend, the bassist Gary Fletcher, along to that first rehearsal, was a bonus.  Dave Kelly’s guitar and vocals form the very backbone of The Blues Band’s distinctive sound.

The Blues Band is still one of Britain´s best Blues Band and set up high standards.

In the Heydays of the Blues Band the 80ties, Dave Kelly always tried to stick with the Folk Blues Tradition of the 40ties or 50ties to play as many pure Solo Concerts as possible, today modern description will be “unplugged”.

Especially these Solo shows gave him the musical freedom to break with the strict Blues border rules from the Band.

With luck a time document from this period was found and transferred with modern sound equipment to get it update.

This double CD “ Solo Performances 1986 to 1989”  captured the most beautiful moments and show the variety of this British Blues Icon,  from Folk Blues Traditional over Rock’n’Roll, Beat to Country Songs, but ever without his typical Blues touch in a “Unplugged” concert situation.

Dave Kelly shows an outstanding guitar playing and the recording offering a quite atmospheric sound in his “Blues World”.

Today, after 35 years ‘treading the boards’ with the band, with his solo albums, duo tours with Paul Jones, and soundtrack work (for commercials and such projects as BBC TV’s ‘King of the Ghetto’ and the Comic Strip’s ‘Strike!’) Dave Kelly is firmly established as Europe’s premier blues performer.