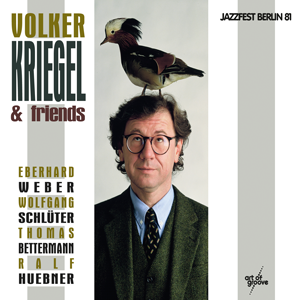 His first record came out in 1968 and is entitled With A Little Help from My Friends. At a jazz festival in Dusseldorf five years earlier, he had won a competition for amateurs. With the American vibraphonist Dave Pike, he formed a band from 1969 to 1972 whose music kept echoing for many years. The guitarist and draughtsman from the Frankfurt jazz scene gathered a circle of friends with every new album. Like on November 8, 1981, when he presented a concert in Berlin titled Volker Kriegel & Friends. For that, he chose primarily new pieces that he had recorded for his solo album Journal (Mood Records) at the sound studio Zuckerfabrik in Stuttgart in August; only “Chateau Sentimental” originated from the 1978 album “House-Boat”.
The core of Journal formed Kriegel’s desired band from that time that he introduced at Metropol in Berlin to an enthusiastic crowd. When the all-young audience was demanding another encore, the guitarist stepped in front of the microphone for the first time and explained: “We are an occasional formation for this evening. We are only able to play this repertoire and that’s it.”
Of course, the term “occasional formation” was meant ironic. The motor of the Mild Maniac Orchestra was also the core of the band, Kriegel playing guitar and Thomas Bettermann from Dortmund with his whole arsenal of keyboards. In addition to that came three musicians for who the Darmstadt-born Kriegel had cherished a special admiration for years. It soon became clear that he had much fun to drift away from the heavily composed musical frame of the Mild Maniac Orchestra – into more relaxed regions of jazz allowing his friends a lot of space. “Chateau Sentimental“ and “Schwebebahn“ turned out twice and three times longer as their studio version, not least because of the soft power of the rhythm section. The according to Kriegel “honorable” Eberhard Weber had been part in his first band Spectrum and a considerable share in Kriegel’s albums for the label MPS: Inside: Missing Link (1972), Lift! (1973) and Mild Maniac (1974). Weber, the phenomenal E-bass player with a solid background in classical music and jazz was the perfect counterweight to Kriegel who you could immediately recognize as an autodidact. Especially when you saw him near and not only heard how he ran with two fingers along the fingerboard, slightly sideways like a crab, only occasionally using the ring finger and often hiding the little finger. This peculiar technique is similar to Django Reinhardt’s who invented his strange 2-3 finger technique after a serious accident. How such a melodious music and such wonderful harmonies like those of Edu Lobo from Brasil, another of Kriegel’s admired musicians, could originate from these strange contortions, stayed his secret.

Now over to the other gents from his circle of friends who, in Berlin, found themselves on a stage that had been crammed with boxes and crates. It looked like an art installation over which Christo had only needed to throw a huge cloth. In six of the nine tracks from Journal (Mood,1981), the vibraphone of Wolfgang Schlüter from Hamburg rings out, almost tenderly in “Naura”, Kriegel’s dedication to another of his friends, the musician and jazz editor of the NDR, Michael Naura. I had been invited at that time to be the announcer, and I remember well how thrilled everyone was by Schlüter’s artful use of the mallets – in front of the stage, on stage and back. Like with Weber, Kriegel had a particularly deep relationship with “Wolfgang S.”.

As he wrote in 1978, in the commentary on House Boat, “It had been our intention to make an album together for many, many years.” But they did not get down to it as Schlüter was working for the German broadcasting station NDR in Hamburg on a regular basis and Kriegel had frequently been on tour with the Mild Maniac Orchestra. Until in Berlin the time had finally come. Keyboardist Thomas Bettermann had been a member of the Maniacs since 1976. He played the Fender Rhodes, the Mini Moog as well as the Yamaha piano and participated on eight albums with guitarist Kriegel during ten years. Even though Volker Kriegel is often regarded as one of the pioneers of German jazz rock and as someone who had an open mind about everything that was innovative in the field of post fusion, people tend to forget that he started at the Jazzkeller in Frankfurt. After the Berlin gig he did not want to engage a noisy rock drummer and dropped MMO funk. Instead, he asked a musician called Ralf Hübner to join in. Hübner had been influenced by the subtle art of Paul Motian and had gained valuable experience while working with the legendary Albert Mangelsdorff -Quintet. According to Kriegel this had made him “a precision mechanic in the field of jazz”. Hübner, incidentally, can be listened to on Eberhard Weber’s ground-breaking solo album The Colours of Chloë (ECM, 1973).
The concert at the Metropol starts with the atmospheric “Calcador” where Kriegel plays his so-called sitar guitar, which was probably built by his friend Peter Coura. He then changes to his guitar, the one that stands for Kriegel’s characteristic sound astonishingly resembling the sound quality of Pat Metheny and John Scofield. A few months earlier the Mild Maniac Orchestra was on tour for two months in Africa for the German cultural association Goethe Institute. On one occasion, they jammed with local musicians in Bamako in Mali. The new songs being composed in a modal way, however, rather follow the thread that Miles Davis once unravelled on Kind of Blue. After twisting his mallets, Schlüter plays muted sounds and restrains himself until he finally falls into a brilliant solo that makes the audience clap enthusiastically. You can tell that this alleged “casual band” rehearsed a lot. This band can easily compete against the Gary Burton Quartet as well as Eberhard Weber’s album Ring (ECM, 1974) – also thanks to Wolfgang Schlüter. As the Berlin concert was conceived to be a long set without any breaks, Volker hardly gives any instructions, sometimes only by nodding or giving the thumbs up, always being focused on what is happening. The music is much more challenging than it sounds, more expressive than it is expected of the band leader who appears so introverted. It conveys a daydreaming feeling which Kriegel loved so much. One of his compositions is entitled “Schwebebahn” (in Englisch, “aerial cableway”) – the title perfectly symbolizes this specific mood. What is unmistakably characteristic of Volker Kriegel’s work – be it his music, writing or drawing – is the quiet, floating tones and sequences similar to soundtracks, elaborately combined and ending with virtuosity in swinging solos, hence turning into a slightly melancholic mood that implies subliminal and gentle pleasure.