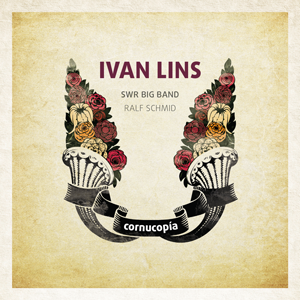 „Cornucopía” – that is exuberant imagination, musicality and creativity all in one. The way Ivan Lins and the SWR Big Band combine two different worlds on “Cornucopía”, the present album has the stuff to become a milestone. For the Brazilian superstar, the CD is the best he has ever made. This also applies to the SWR Big Band and Ralf Schmid, who are following on from the predecessor album “Bossarenova” in the uncompromising pursuit of their very own musical mode of expression, which also includes, for example, electronic elements. A grandiose mélange from Brazil and Germany, from Rio de Janeiro and from Stuttgart, where the SWR Big Band is based.

“Cornucopía – that is a phenomenal album,” says Lins, “and the SWR Big Band is the most astonishing music ensemble of its kind that I have ever played with.

They invest in different rhythms, engaging in intensive percussion work and using new technologies and daring arrangements going well beyond the familiar standards. And despite these differences, it all sounds truly wonderful.” Nonetheless, we must not forget that the models for this are all from Ivan’s pen. And what Lins fans in particular will enjoy: most of the tracks are compositions that have never been released. The very first track, the African-influenced Araketutu, is a sun-drenched listen, and reflects the spirit of this production just as much as the atmospherically dense Atlantida, sung by Paula Morelenbaum. The new album has a total of 13 songs. Discoveries include Carroussel de Bata and Todo Mundo, or Ivan’s declaration of love to his home city of Rio de Janeiro in the Samba de Vison.