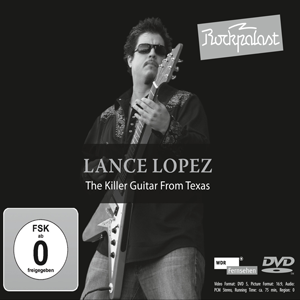 Born in Shreveport, Louisiana, Lance Lopez relocated to Dallas, Texas when he was 12 years old, then to New Orleans, Louisiana 2 years later.
He has been a professional musician since the age of 14 when he began playing local bars in and around the New Orleans, Louisiana area.
During his High School career in New Orleans, and later in southwest Florida, Lance played in a variety of bands that played clubs at least 3 nights a week. At 17, Lance and his family moved back to Dallas, Texas. Returning to Texas Lance was immediately hired by Soul Legend JOHNNIE TAYLOR.
Lance toured with JOHNNIE TAYLOR for 6 months performing with artist such as BOBBY BLUE BLAND, JOHNNY GUITAR WATSON, LITTLE MILTON, MARVIN SEASE, and
BOBBY RUSH. At 18 Lance was hired by modern blues great LUCKY PETERSON. Lance toured with LUCKY PETERSON for 3 years performing with artist such as BOOTSY COLLINS, LARRY GRAHAM, LITTLE RICHARD, JIMMIE VAUGHAN, JUNIOUR WELLS, and LUTHER ALLISON.

At age 21 Lance Lopez held the position of band leader with LUCKY PETERSON when he left to play guitar briefly with the BUDDY MILES EXPRESS.
In 1998, Lance recorded his independent debut CD entitled “FIRST THINGS FIRST” which was produced by Buddy Miles as well as Jay Newland. It found great response in Europe where Lance had already made a name for himself touring with LUCKY PETERSON.

In August of 1999 Lance won the Southeastern Regional JIMI HENDRIX Electric Guitar competition in New Orleans sponsored by EXPERIENCE HENDRIX.
In December 2000 Lance toured Europe for the first time with his own Band In 2001 Lance Lopez toured Europe extensively, opening for STEVE VAI and JEFF BECK. Also in 2001, Lance also opened for B.B. King in Texas and won Blues Band of the Year Award at the Dallas Music Awards.
From 2003 to 2005 Lance spent recording a catalog of Disc for the Indie Guitar label GROOVEYARD RECORDS based in Upstate New York.
His first release on GROOVEYARD entitled “WALL OF SOUL” was RECORDED IN 2003. It was co-produced by and featured long-time friend and guitarist ERIC GALES. Also featured on the disc was a special appearance by DOUG PINNICK of the band KING’S X.

After the release of “WALL OF SOUL” Lance performed regionally around Texas opening shows for LOS LONELY BOYS and JOE BONAMASSA.
In 2005 Lance along with TOMMY SHANNON and BUDDY MILES formed BAND OF TROUBLE. They performed concerts with RICK DERRINGER, JOE BONAMASSA and
KENNY WAYNE SHEPHERD also that year Lance recorded “SIMPLIFY YOUR VISION”.  In 2007 Lance recorded his 4th studio release “HIGHER GROUND” playing all the
instruments.

On his 2008 Summer Tour of Europe Lance was the support act on concerts with legendary performers ZZ TOP, WHITESNAKE, DEF LEPPARD, TEN YEARS AFTER and JIMMY CLIFF as well as headlining many well known Blues Festivals. In 2010 the new album “SALVATION FROM SUNDOWN” is released by MiG worldwide.
The album was produced by JIM GAINES, one of the world’s famous Blues-Rock-producers and Lance Lopez is supported by  TONY VALDEZ (bass) and CODY NORMAN (drums) “SALVATION FROM SUNDOWN” was released exclusively in a limited edition with a DVD of the WDR Rockpalast-concert from the 25th of July 2009.
Here Lance Lopez appears with TONI VALDEZ (bass) and AL PAHANISH JR. (drums).