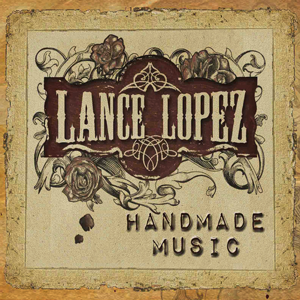 The album title promises pure “Handmade Music” and Texas based LANCE LOPEZ is keeping his word with all the ten blues rock tracks (twelve tracks on the limited edition MIG 20050). But the guitarist widens the scope on the genre itself.

The songs were recorded at the famous Ardent Studios in Memphis Tennessee where Led Zeppelin and ZZ Top have also been working before. For the process of recording LANCE LOPEZ was able to draw back on the experience and the help of Jim Gaines. The producer had already demonstrated his skill and his competence in the cases of Stevie Ray Vaughan (“In Step”), George Thorogood (“Ride Till I Die”), Steve Miller (”Fly Like An Eagle”) und Carlos Santana (“Supernatural”). He also took part in recording John Lee Hooker’s milestone “The Healer”. Now Jim Gaines is controlling the fate of LANCE LOPEZ and a track like “Traveling Riverside Blues” combines the perfect studio sound with the rawness of a live performance. The sound engineer Pete Matthews who has already been working with ZZ Top makes up the crew. So it does surprise that “Handmade Music” is also a masterpiece in technical terms.

In comparison with LOPEZ’ previous album “Salvation from Sundown”, the compositions and interpretations of the axe man appear even more mature. The instrumental “Vaya Con Dios” displays his exceptional dexterity. LANCE confirms: “On this album I strike the right chord like I seldom did before. But the whole (new!) band sounds incredible!” The bass player Chris Gipson and the drummer Jimmy Dereta take care that the power trio is at its best. This was exactly what LANCE LOPEZ had in mind: “I have always admired bands like Cream, Jimi Hendrix Experience and ZZ Top. They all consisted of remarkable soloists and that makes totally sense because with such a trio you have no possibility to hide behind a wall of keyboards.”
How much LANCE LOPEZ really can rely on his sidemen in a live situation could be witnessed lately

when his band was on tour with Johnny Winter. He wanted to win the audience over ”I feel honored to stand on the same stage as the man whom I have adored since I was a kid. His guitar playing has always impressed me. And of course, I want to convince the audience of Johnny Winter”, LOPEZ had said shortly before his successful gig at the Bluesgarage Isernhagen. That’s where he also spoke about his early enthusiasm for blues music and his desire to become an acknowledged guitarist.
“I always had this dream of following my big heroes.”’
LANCE LOPEZ has pursued this aim since his childhood. He was born in Shreveport, Louisiana. At the age of twelve, he moved to Dallas with his parents, after that he lived in New Orleans for a while. His music was strongly influenced by these two metropolitan cities. Not only did his older brothers make him listen to their blues and rock albums but even his father took him to concerts. And so as an adolescent, LANCE saw the big Stevie Ray Vaughan at his last concert in his home town – playing with BB King! When he was 14, LOPEZ was already playing with local bands. Doing gigs regularly in clubs in Louisiana and Florida was the best way to develop his musical talent. Finally, when his family returned to Texas, LOPEZ had gained enough experience to offer his services as a guitarist to soul legend Johnnie Taylor. A short while later he became the bandleader of the backup act of bluesman Lucky Peterson. And so it didn’t take too long, before he recorded his debut album “First Thing First” in 1998. At the turn of the millennium LANCE toured Europe as supporting act of Steve Vai and Jeff Beck. In 2001, he performed as special guest of BB King and won the title “Blues Band of the Year” at the Dallas Music Awards.
In 2009, he was at the peak of his career, for the time being, when he performed at the German music TV show “Rockpalast”, broadcast by the TV station WDR. The concert was recorded in Cologne on July 25th and then released on a DVD, together with the CD “Salvation From Sundown”. This concert has left a lasting impression on LANCE: “For me this was like being knighted. I had the rare honour of appearing in the same show where my idols Stevie Ray Vaughn, ZZ Top and Johnny Winter had performed – I’m very proud of that!”
LOPEZ’ latest release “Handmade Music” is a worthy successor to his album “Salvation From Sundown” and confirms that he deserves the applause he has been given – according to the motto “Get Out And Walk” (recommended track).