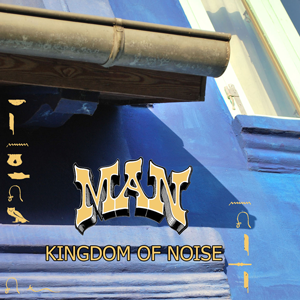 After “Diamonds And Coal” from 2006, “Kingdom Of Noise” was the second album of the Welsh psychedelic prog. rockers Man without any participation of an original founding member. Ray Williams and Jeff Jones had already left the band in 1970 after the second longplayer “2 Ozs of Plastic (With a Hole in the Middle)”. Martin Ace and Terry Williams took over their place. Phil Ryan was involved for the first time in the production of the album “Be Good to Yourself at Least Once a Day” (1972). The band merry-go-round turned almost tirelessly with Man, even after the band broke up in 1977 (during the farewell tour through the U.S., Europe and North Africa, the album “All’s Well That Ends Well” was recorded) and reunited six years later. Disagreements about the musical direction of the band seemed to be the order of the day and still characterized the studio sessions for “Kingdom Of Noise” more than 30 years later. Phil Ryan had taken over the production and played the keyboards on all tracks, Martin Ace played bass and sang, with Martin’s son Josh (guitar, vocals) the second Man generation was at the start, the drums were played by Bob Richards (among others also part of Deke Leonard’s Iceberg) and Rene Robrahn. Sometimes it was written in the stars whether this album would be produced at all. And so, in the end, Martin Ace made his peace with the really enjoyable recordings after reviewing the mastertapes: “The album was mostly recorded in Wales when George and Bob were still with us. Phil, who was producing the Album, was getting more and more frustrated with the way it was going and it ended up with the engineer walking out and trying to prevent us from finishing the recording. I managed to get hold of the files and finished writing and recording the album with Alan Murdoch in Tonstudio Holstein with René on drums. Alan and Phil painstakingly got the files together and then mixed the whole album at his studio. It was a difficult project but I think it was well worth it in the end.”