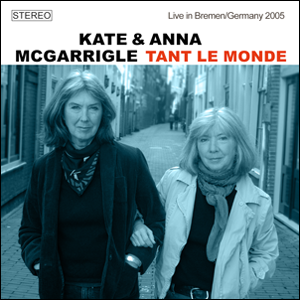 Singers/songwriters Kate and Anna McGarrigle (born in Montreal of mixed English- and French-Canadian background, and grew up in the Laurentian Mountains village of Saint-Sauveur-des-Monts, Québec) have performed to critical and popular acclaim throughout North America, Europe, and the Far East for three decades. Their albums have earned record of the year awards from Melody Maker, Stereo Review, and The New York Times, among others. Their songs have been widely recorded by other artists, including Linda Ronstadt, Judy Collins, Emmylou Harris, Pet Shop Boys and Nana Mouskouri.

Among their many collaborations, the McGarrigles have performed and recorded with the Irish group The Chieftains, with Emmylou Harris on her “Wrecking Ball” album (with Anna’s “Goin’ Back to Harlan” among the album’s tracks) and joined Joan Baez on her live recording “Ring Them Bells”.

Kate and Anna have composed and performed music for several movie and television productions, including a number by the National Film Board (NFB) of Canada, appeared on Saturday Night Live and Late Night with David Letterman, sung in the Public Broadcasting System fundraiser Songs of the Civil War, and starred in their own PBS special, with Linda Ronstadt and Maria Muldaur as guests. In 1994, Kate and Anna were awarded the Order of Canada.

“Our second French record “La vache qui pleure” had just been released in Europe and we were touring in support of it. At that time, the core group consisted of Kate and I, with Joel Zifkin on violin and Michel Pépin on guitar and bass, drummer Thom Gossage and my sweet-voiced daughter Lily Lanken. I hope you enjoy the music. Thank you for listening!” (Anna McGarrigle, in April 2022)