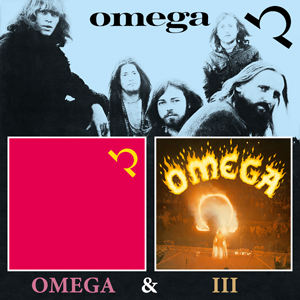 More than 50 million records sold, LP productions in Hungarian, German and English, tours and festival appearances throughout Europe and Japan, at least 50 cover versions or adaptations of the world hit “Gyöngyhajú lány” – Omega are Hungary’s number one rock export. In 2022, the band will be celebrating its 60th stage anniversary, making it one of the longest-serving rock formations in the world.

On St. Nicholas Day, December 06, 2021, singer and founding member János Kóbor passed away due to the coronavirus. Now the Omega albums from the well-known and successful Bacillus era will be rereleased originally and completely on CD, vinyl and digitally.

The 1973 LP “Omega I” was a compilation of songs from “Élö” and from the album “Omega 5”, which was released in the same year in the Eastern bloc. To boost sales of this first Bacillus record by the Hungarian flagship rockers, it was backed by two singles of the ballad “Gyöngyhajú lány” in English (“Pearls In Her Hair”) and German (“Perlen im Haar”).

After a few trips into symphonic and psychedelic rock realms, Omega presented themselves on “III”, released at the end of 1974, again more down to earth: Nine crisp hard rock tracks, only one exceeding the four-minute mark. For this album, Peter Hauke, still producer, and Omega not only used current material, but also included songs that had already been recorded in the Hungarian original in 1969: “Stormy Fire” and “Spanish Guitar”. In order to attract a broader audience, the songs had been pared down, instrumental soloing was reduced. Although Omega had always flirted with progressive stylistic means since their turn to psychedelic rock in 1969, this time they kept their hands off intricate arrangements. Instead, they turned towards the zeitgeist by including rather blunt rock tunes like “Stormy Fire”, “Go On The Spree” and “Fancy Jeep” in the list, which could also please a glam rock fan and passionate consumer of single hits by bands like The Sweet and Slade.

The series with re-releases of Omega from the catalog of the rock label Bacillus will continue.