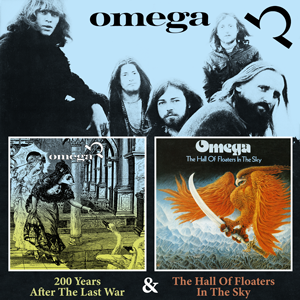 More than 50 million records sold, LP productions in Hungarian, German and English, tours and festival appearances throughout Europe and Japan, at least 50 cover versions or adaptations of the world hit “Gyöngyhajú lány” – Omega are Hungary’s number one rock export. In 2022, the band will be celebrating its 60th stage anniversary, making it one of the longest-serving rock formations in the world.

On St. Nicholas Day, December 06, 2021, singer and founding member János Kóbor passed away due to the coronavirus. Now the Omega albums from the well-known and successful Bacillus era will be rereleased originally and completely on CD, vinyl and digitally.

“200 Years After The Last War” (1974) only shares the title track, a metaphoric piece about birth control in a totalitarian system, with the original legendary banned Hungarian version „200 évvel az utolsó háború után“.The almost 20-minute “suite” on side A, originally released on OMEGA 5 in 1973, combines various influences from which the Hungarians developed their own style at the time: Blues, early Pink Floyd, Led Zeppelin and Deep Purple.

“The Hall Of Floaters In The Sky” (1975) displays a similarly bizarre cover as “200 Years After The Last War”, one reason why it counts among one of the exceptional releases of the group.

Having produced the last three records at the Dierks Studios, this time they turned to the Chipping Norton Studios in England, and came back with an acoustic hybrid of Focus, Manfred Mann’s Earth Band, Sparks and Cockney Rebel. The sound was drier than before, the guitars were crisper, the keyboards more dominant. The orchestral arrangements gave the entire album a touch of space rock.