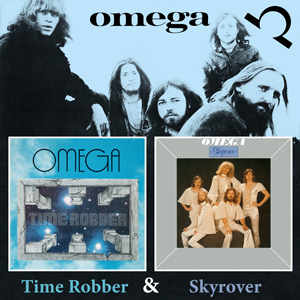 Part 3 of the re-releases from the successful years of Omega on the Bacillus – label of producer Peter Hauke, this time with the albums “Time Robber” and “Skyrover”.

After four studio albums and one compilation, the Hungarian megastars Omega were still much of an an insider tip in the West. However, sales figures were noticeably rising, though far from going through the roof. In addition, the band had evolved, becoming more professional, both in their live performance and in their appearance. Those in charge at Bacillus/Bellaphon definitely meant to hold on to Omega, so in 1976 the contract with the quintet was extended till 1980. And the band, together with producer Peter Hauke, went to the Europasound Studios in Offenbach to record TIME ROBBER. That LP was Omega’s breakthrough in the West. To date, the album is said to have sold around two million copies. And this success was well deserved; for the first time, the Hungarians delivered a complex, self-contained work.

Hopes were high for SKYROVER. Omega came to Offenbach again and self-produced an exquisite successor of TIME ROBBER, which was in no way inferior to its immensely successful predecessor. Quite a few Omega fans even consider SKYROVER to be the better record, since the band elegantly merged the styles, which on TIME ROBBER still appeared sometimes a bit stiff and side-by-side. “Russian Winter” has become a live classic – titled “Lena” on the Hungarian LP version. With its Eastern European folklore references, the song stood out from the musical concept, and that’s probably why it became a fan favorite.