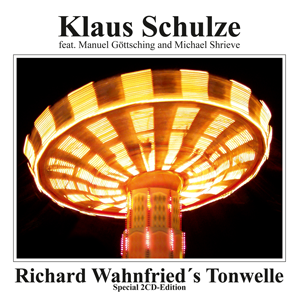 Since the late seventies Klaus Schulze uses the alter ego Richard Wahnfried. This pseudonym shows his love for the music of classical composer Richard Wagner and also serves as an outlet for Klaus Schulze to work informally and beyond stylistic borders with musicians of other genres. The album “Tonwelle” was released in 1981 as Richard Wahnfried’s second – and it was recorded by a top-class cast.
For the first time since having left Ash Ra Tempel, Schulze is working again with Manuel Goettsching whose unique guitar playing leaves a strong imprint in all. At least as colourful are the other musicians like Michael Garvens (vocals) or Santana drummer Michael Shrieve.
Within Klaus Schulze’s universe “Tonwelle” remains an exceptional album to day because it is an extremely multifarious collaboration which Schulze created the perfect spaces and moods for his fellow musicians to unfold their individual strengths.
Klaus Schulze on the new edition of “Tonwelle”:

“I have heard these recordings for the first time in 30 years again and I find the recording at a slower pace much better, although ‘Schwung’ and ‘Druck’ does not quite fit anymore. But if you would change the titles too, it would only lead to more confusion. I am sure that old and new fans will like these new versions.”