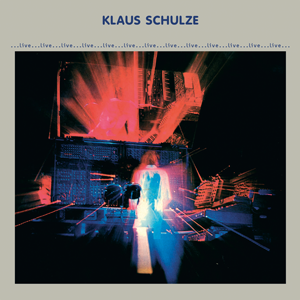 Once again, past master Klaus Schulze appears to be in top shape on his twelfth solo album. There is almost no-one who can hold a candle to him as a live musician performing on the synthesizer. (‘Elmshorner Nachrichten’/Germany, November 1980)

Once again, past master Klaus Schulze appears to be in top shape on his twelfth solo album. There is almost no-one who can hold a candle to him as a live musician performing on the synthesiser. (“Elmshorner Nachrichten”/Germany, November 1980)

The Meta Musik festival at the National Gallery in Berlin, from which the “…Live…” track “Sense” was taken, was an event arranged by Walter Bachauer. He was the head of programs at radio station RIAS [founded in 1946 by Americans, the acronym means “Rundfunk im amerikanischen Sektor or Radio in the American Sector”]. He also was a big fan of minimalist music. [Under the pseudonym Clara Mondshine, W.B. released the albums “Luna Africana” (1981) and “Memorymetropolis” (1983), both produced by Klaus Schulze.

The entire Berlin scene was into this new minimalist music at the time, which was precisely the reason why Bachauer had invited me. He had probably said to himself, well this time we’ll also engage a German guy for this event who does something in that style. I just happened to fit into the concept. While the other musicians had their hand-made minimalism, I made it electronically.

The bonus track “Le Mans au premier” is taken from a concert at the abbey L’Epeau near Le Mans in France on November 10th 1979. My music is very emotional and spontaneous, so I play in a quieter mood in a church or an abbey than at the Palais des Sports in Paris for instance. The atmosphere of the place always strongly influences me; that’s why “Le Mans au premier” is also one of my quieter live recordings but a very nice one nevertheless.

[All quotations were taken from an interview conducted by music journalist Albrecht Piltz with Klaus Schulze in January 2007, exclusively for this edition.]