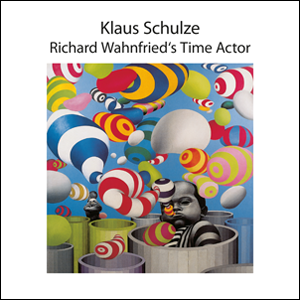 In 1979, Time Actor was the first album that Klaus Schulze released under the pseudonym Richard Wahnfried. The name was both, a reference to Richard Wagner, whom he admired, and to Klaus Schulze’s son Richard.

Artistically, Richard Wahnfried was a new beginning at the time. Several threads came together in this project: on the one hand, Klaus Schulze, not least because of his work with the All Star project Go, had a great desire to play with musicians outside of the electronic genre; on the other hand, this album was, like the upcoming Richard Wahnfried releases, strongly influenced by the musicians with whom Klaus Schulze played in the respective phases.

In the case of Wahnfried’s debut “Time Actor”, these were the Santana-drummer Michael Shrieve, with whom Klaus Schulze had already played on Go and on later Schulze albums such as “Audentity”, the cellist Wolfgang Tiepold, the keyboardist Vincent Crane, as well as Arthur Brown.

Brown, who became famous with the 1960s hit “Fire”, was also featured on the Schulze album “Dune” (1979), released at the same time, and on Schulze’s first live album in 1980. Brown now played a central role on “Time Actor”: For six of the seven tracks he wrote, improvised and sang or recited his own texts on the subject of time, much more freely, more theatrical and more exalted than he is known from the album “Dune”, partly alienated by the harmonizer.

Remarkable here are the streamlined structures and the relatively short playing time of the individual tracks by Schulze standards, which clearly stood out from the epics of previous releases.

The typical Klaus Schulze trademarks can also be heard here, although “Time Actor”, like the following Wahnfried productions, was not always easily digestable for the Schulze purist, which in retrospect is just another indication of Schulze’s artistic consistency and creativity.

“Time Actor” was not available for a long time and can now finally be heard again in a remastered version, just a few months after Klaus Schulze’s death on April 26, 2022, inclusive of the original cover, the painting “Lauter Ballons” by artist Peter Nagel.