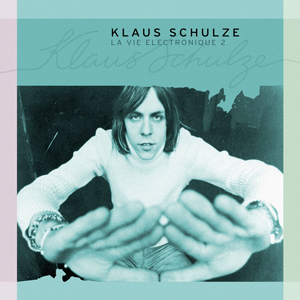 “La Vie Electronique” first was published as a strictly limited 50 CD-Box and later it was released in chronological order in 3CD-sets including some material never released before.

This second set contains pieces, which have been recorded between 1972 and 1975

“North of the Yukon“ and “Study for Philip K. Dick“ are from another historic tape with no date or other markings, with no real start and no end. lt was probably recorded in 1972 or 73 and what you hear is mostly the heavy sound of Klaus‘ old electric Teisco organ to which he added some strange sounds. More of these strange sounds he used on “Electric Love-Affair”.

Is it wrong if I state that Klaus was the first who dared to use noise (as in “Electric Love-Affair”: a lot of noise and buzz) as stylistic device? The four tracks “Nightwind“, “Minuet“, “Signs of Dawn”, and “Land der leeren Häuser“ are from a collaboration in the year 1973 between Klaus and a friend at this time, Hans-Jörg Stahlschmidt. These titles were played and recorded at ‘delta acustic“ studio in 1973. The proposed group name for Klaus‘ and Hans-Jörgs collaboration changed between “Tau”, “Tao“, and “Timewind” (!) Also, a deal with a German record company had already been made, but for reasons unknown today, the album never came out. The music sounds like early ‘New Age‘, but of course this definition wasn‘t known then. Klaus very own keyboard playing style is already identifiable. Klaus mostly plays the organ, and both played also guitars and bass guitar. The whispering voice on “Signs of Dawn” is Klaus. The singing voice on “Land der leeren Häuser“ is not Klaus. The three shorter titles are the original titles as given on the tape box. In 1973, same more “avant-garde” music was done by Klaus, for the radio play “Das Große ldentifikationsspiel (The Big Garne of ldentification)”, a Science-Fiction thriller by Alfred Behrens, it won the award: “Preis der Kriegsblinden Deutschlands“, and since then it has been regularly repeated on German radio. The tape box says: “Ballett Titanensee“, and it dates from about 1973.

lt’s mainly, if not only, the Farfisa “Professional Duo“ organ und an echo device. At least to me it sounds as if it‘s already the “Farfisa“ and not the Teisco anymore.

In February 1973 we picked up this new and heavy two-manual organ from Farfisa, for a concert in Paris (which was Klaus’ first solo concert).

Of course, there was no ballet ever produced with this music, and therefore, for release we gave it the title “Titanensee“ and cut the additional word.

“Studies for Organ, Keyboard and Drumset”: recorded 1974 in Berlin, this music was then stored away in another of those dusty tape boxes, where I unearthed it 22 years later, under exactly this title. We hear Klaus play a drum set, a pair of bongos, the Farfisa ‘Professional Duo“ organ (which I have just mentioned above), and a second keyboard which could be the ‘Solina String Ensemble“(?). Reverb, echo, phasing and stereo panning were also used by Klaus in his now established way.

“Memento Mori“ and “Blaue Stunde” belong together. Not that the music is the same, but they both mark a change in Klaus‘ music. The era of “Timewind” and “Moondawn“ is coming. I can still see Klaus, sitting night after night in front of his equipment in the cellar of the house that we had rented in Hambühren, after our move away from Berlin in August 1975. The recording was probably done in autumn or winter 1975 . Partly this is a beautiful and at the same time eerie experiment, und partly it is very soft, silent, subdued music. Both tracks are typical for this “cellar situation“: Here, Klaus used to play for many hours without a break, this was his normal nightly routine. Sometimes the tapes from these long sessions were stored… und therefore, we have two other beautiful gems of classical Schulze that mark a change, from early experiment to the KS as we know & love him since “Timewind“ and “Moondawn.