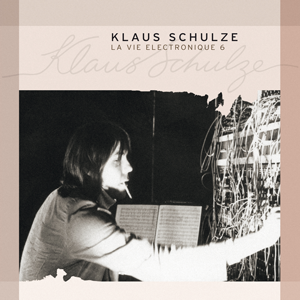 CD 1, on the one hand, contains the second part of the Oberhausen-concert, with “Schwanensee” on the other: two solo pieces which were recorded in 1976 in the studio in Hambühren.
“Fear at Madame Tussaud’s” was recorded in April, 1977 in the London planetarium – at that time a novelty, for it was the first time that a concert was held in a planetarium.

“Zeitgeist” is a concert which was recorded on October 17Th , 1977 in front of 5500 people in the Saint Michael cathedral in Brussels, “Inside The Harlequin” is the encore of this evening.
The recording date of “La Vie Secrète” cannot be exactly determined after all years any more. Recorded either in 1977/78 or 1975 this piece remains a very quiet, almost meditative jewel.
In contrast to this stands „Barracuda Drum“, recorded about 1978 with Harald Grosskopf on drums.

Last but not least at the end of the third CD we encounter the Klaus Schulze of 1979:
In October and November that year Klaus Schulze was on tour with Arthur Brown (“Fire”). “There was Greatness in the Room” is a fragment of the encore of concert from October, 29th 1979 in Brussels. The specific thing about this recording: Beside the voice of Arthur Brown the vocoder-voice of Klaus Schulze is also to be heard …