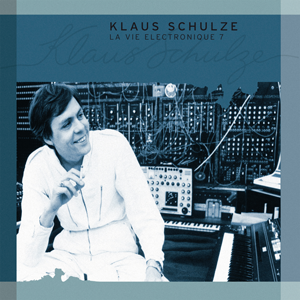 “Re: People I Know” is the first of the two long pieces that Klaus played during his Düsseldorf concert
on the 30th of September 1977. It’s similar to the highly valued piece that KS played around the same time in Brussels’ St. Michaels cathedral.
“Avec Arthur”: During the lengthy 1979 tour, Klaus played a long solo piece that filled the first half of the concerts as usual. After the intermission, the singer Arthur Brown joined him for the second piece. This is one of those energetic second halfs. Arthur could be, and was often, very high-spirited, very good, I dare say even excellent. As here, on the 25th of October 1979 in a youth club of the Belgian town of Liège. During the peaceful part after the break (and his famous roar) Arthur sings partly in French. Merveilleux! My diary reports: “Small youth club, jam packed. Good concert.”

“Crazy Nietzsche” is loosely based on Klaus’ well-known “Friedrich Nietzsche” title from the “X” recording session. As on the “X” tracks, the drumming is by the great rhythm man Harald Grosskopf. First, Klaus recorded Harald’s familiar solid pulse, and for the middle part – “Asketische Ideale” – he was asked to add some floor toms’ playing. As usual during that blooming Schulze era, also this track was recorded at the Panne-Paulen studio in Frankfurt. After listening to the music for the first time after many years, Klaus told me it must be a live recording because of the sound of the Korg PS 3300 that he only played in concerts not in a studio. Hm.Judge by yourself.
“The Future”: From circa 1978. A grave, full-sounding masterpiece. The music reminds of “Dune” but it is without the usual cello sound of this classic album. Hear Klaus on vocoder at the very end: “Just Imagine”.
As KS remembered, the music of “My Virtual Principles” with its abstract but beautiful sounds was an alternative attempt on the ‘Barracuda’ film soundtrack which wasn’t used then. Besides his usual electronics, the percussion instruments are also played by KS. Part of Klaus’ drumming is from a 1970 (!) tape, treated with an ‘Analogue Harmonizer’; his organ playing is from a 1972 tape.
The cello is played by Wolfgang Tiepold, and the gipsy fiddler is the same as on the “X” album. The old and new recordings, the mixes and treatments were done by KS in late 1977 or in January the following year, at the already mentioned studio in Frankfurt, with the very helpful hands & brain of Eberhard Panne.
“Die Erde ist rund” was taped during the lengthy 1979 tour. It is the encore of the concert given in the German town of Koblenz on the 22nd of October. My diary says the following about this gig:
“22.10. Koblenz. Viele klatschende Echos in der Halle. Grosse Bühne. Enthusiastisches (Rhythmus)Publikum. Erste Zugabe nur etwa 10 Minuten lang, zweite nicht mehr, da Publikum allzu unruhig und rockig” (22 October, Koblenz. Sadly, the hall has a shattering sound (slapping echoes). kdm fecit, May 2008