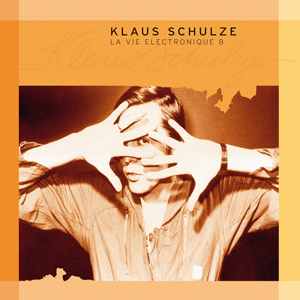 DURING THE YEARS 1977-1983…
…Klaus Schulze recorded some of his more introspective works. Albums like MIRAGE, DUNE, and DIG IT saw a significant change in his style of playing and his way of composing. While Schulze was quickly expanding his collection of synthesizers, that ultimately had its effect on the outlook of the music and the possibilities of performing that in a more exquisite way. Play a track like “Synthasy” and notice that Schulze has come a long way since TIMEWIND and MOONDAWN. On this 8th part of LA VIE ELECTRONIQUE there’s a selection of stuff that was archived beside his official albums in those years.

A large part of this 3CD-set forms the appearance of concert recordings (made on a cheap, but stereo radio cassette recorder) from Klaus’ 1979 tour with singer Arthur Brown. Besides the recordings that made up three sides of his monumental “…LIVE…” album that was released in 1980, there were plenty of other versions available of the material that Schulze played during the fall of 1979.

The concert that the two did on October, 24th in the auditorium of the Technical University in Brussels captures the energy and passion of what the unique combination of Schulze-Brown was about. “Faster than Lightning”, that formed the second set that night, says it all. Before the intermission, Schulze is certainly in the mood during “Dans un jardin”, while crafting musical landscapes, playing soulful solos on his Minimoog, also on a pair of electronic bongos, and setting a more darker tone during the last two movements. There’s more of this beautiful gig elsewhere in this set.

The “Hitchcock Suite” must have been something of a buried treasure in KS’ archives for many years. A four-part composition, in which all the elements of Klaus’ 70s sound are to be found.
From the eerie sounding first two parts to the more sequenced orientated latter parts, it’s like a transitional piece altogether. There are moments that are reminiscent of material from BODY LOVE 2, MIRAGE, but also DUNE. Recorded around 1977/1978, you can actually hear that Klaus is looking for a new direction and is trying to head for the more experimental phase in his late 70s analogue years. For instance, the opening sounds of the “Tippi Hedren” part originate from the Yamaha CS 80, a synthesizer that was a real revolution in the year that it was released, 1977.
I suspect that the “Hitchcock Suite” is one of the first pieces in which Klaus is using this mighty (and heavy!) instrument. From then on, the CS 80 was used by Klaus extensively on records as well as during concerts, mostly as solo instrument (for instance the hard attacks during “A Few Minutes After Trancefer” on the 1981 TRANCEFER album) or as a way to set the tone or the pace of a lengthy and enduring concert piece.

After forty minutes of studio glory, the second CD of this three-CD set features more concert recordings from the 1979 tour. Both “L’affaire Tournesol” and “Bona fide” are encores of concerts played respectively in Brussels (October, 24th) and Aalst (October, 26th). Both share the same type of sequence, but obviously bare their own signature.
In “L’affaire Tournesol”, Klaus builds up the basic track step by step, making room for an almost choral sounding Minimoog solo, which doesn’t sound as harsh as some of his solo playing during concert performances in the early eighties, but it does have the power and the climaxing notes to round it off and bringing the rhythmical piece to an extraordinary ending, using string sounds coming out of the Korg PS 3300. Klaus must have had a jolly good concert that night. On contrary, “Bona fide” is not as prolific and significant and gives the feeling that Klaus was probably a bit in a hurry that night.

CD 2 is rounded off by a fragment of a radio interview that took place on November 26th, 1980, two days before Klaus’ gig with Tommy Betzler (percussion) and Manuel Göttsching (guitar) at ‘Voorst Nationaal’ in Brussels. In the program ‘Kaleidofoon’ he is asked by interviewer Paul Verkempinck about the usage of the GDS computer in his concerts. Actually, that particular gig was pretty radical for the ‘old style’ Schulze fan, when taking notice of the reactions in one of the first KLEM magazines that came out shortly after the gig. “Schulze just played plain rock music”, “Klaus is directionless and lacks inspiration”…., to name just a few. Interesting: in 1980, Klaus Schulze was just at the start of his long journey through the digital age. The DIG IT record was a child of its time and opened doors for more experimentation on synthesizers such as the CS 80, PPG Wave and Fairlight, all recorded in glorious digital sound….

In addition, Klaus got more into drum programming too, partly due to his work with percussionist Michael Shrieve, as heard on CD 3. “I Remember Rahsaan” and “A Quick One” are variations on
“Silent Running”, the mighty second side of his monumental TRANCEFER album that came out in 1981. Also worth of mention is the flute and sax playing of Steve Jolliffe, the guy that was part of Tangerine Dream’s line-up of 1978 and left the band after a fight on stage with TD’s mastermind Edgar Froese during the last concert together in London in March 1978. The ‘little things’ that Jolliffe did with Schulze (and of which a longer part was released on the Wahnfried “Miditation” album in 1986), are nice, but not of great mention. They lack a certain ‘click’ between Steve and Klaus. “Count Me In” features elements from “Spielglocken” and “Tango Saty”, which appeared on the AUDENTITY album (1983), including the Simmons drums and the EEH drum computer, played and programmed by Shrieve.

“Zugabe Timbales” is actually the backing track of the encore that was performed by Klaus and his guest Manuel Göttsching on the fall 1981 tour throughout Europe.
“Keep Up with the Times” is reminiscent of the backing track that was used for the first main part of that same concert tour: a powerful endeavour and the ideal soundtrack for a long Autobahn drive. Finally, how far Schulze went during concerts can be heard on “The Martial Law”, where he gives it all on the Minimoog. What a contrast, compared to the elegant “L’affaire Tournesol” on CD 2. Just listen and be careful: this is angry, but melodic stuff in the typical Schulze eighties way!

The late seventies/early eighties’ work of Klaus Schulze is often overlooked and underrated by many. Hearing the material featured on this 3CD-set, one can discover the ‘other side’ of that particular period when analogue was still there, but digital was about to become the power to be.
And so on…
Wouter Bessels, July 2008