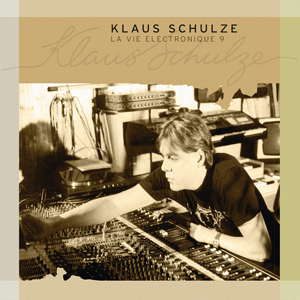 The three tracks on the first CD are a complete SCHULZE concert in Budapest:
Budapest on the 21st of October 1982 in a huge sports arena, with Rainer Bloss on additional keyboards, but mainly he plays the electric piano. This was the only concert that was actually done from a scheduled tour through south-east Europe, together with Tangerine Dream, Rick Wakeman, KS, and Classix Noveaux with Thomas Dolby. For some reasons this tour never did happen, except for a few independent lone concerts. Such as this one..
The first title played in the Hungarian capital is based on KLAUS’ famous “Ludwig” title from the album “X”. The second Budapest title “Peg Leg Dance” is a very hectic and techno-like piece. Here I suggest two things: first, press your “loudness” button, and second, watch for KLAUS’ famous Minimoog solo.

“Die spirituelle Kraft des Augenblicks” (The spiritual power of the moment) is still the Budapest concert. The encore. The announcement is made by KLAUS SCHULZE.
The studio track “Verblüffe sie!” is a bizarre and astonishing piece of music with its heavy beginning and soft ending. It must have been recorded by KLAUS around 1985, …because it’s from a PCM recording and KLAUS used that recording tool only during the mid eighties.
“Seltsam statisch”: I found this on a tape that was marked “Katowice 1983″. Marks, notes, or titles written on SCHULZE’s tape boxes are only sparsely in relation to the actual music which is to find on the tape. This is another of such misleading cases; I doubt that it was recorded at Katowice or any other concert during KLAUS’ outstanding tour of Poland.
It is most likely a studio recording from around this period. The long steady beat is kind of hypnotic.
“Kompromisslose Invention” is a track from a tape called “KS Solo Session LP” – whatever means this again. It is just abstract and heavy sounds, and it’s done as perfectly as only KS can do it. Recorded in the mid 80s. It’s far from being à la mode… but who knows what will be fashionable in the next season? (PS: Originally, this text was written in 1997 for JUBILEE EDITION)
“National Radio Waves” I found again on a PCM cassette with no further inscription except for the word: “Interessant”. I love those helpful hints! It was recorded by KS in his studio in Hambühren, again during the mid eighties. It’s probably just the “PPG Wave 2″ and the rhythm computer.
“The Midas Touch” is nothing but a very catchy rhythm (have I already mentioned that KS is a master with rhythm?), some sounds, and a voice (certainly not KLAUS’), and again it’s from the mid eighties.
kdm fecit, May 2008