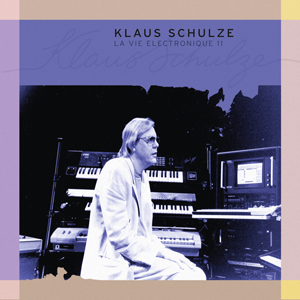 In 1992 and ’93 Klaus Schulze recorded circa ten hours of music, actually not intended for record release, but as so often he had sent me the results on many DAT tapes. I had an idea and told Klaus about it: maybe we could make a set with five CDs? With his usual verve Klaus claimed for ten CDs and I started to work. Together with the newly recorded but unreleased music and with two-and-a-half hours of historic recordings I conceived the first of our multi-CD sets, not knowing if and how many will buy it and how they will like it. This first set of ten CDs, Silver Edition, was released on the 4th of November 1993, and the praise it received immediately was overwhelming. One year later the two thousand sets were sold out.

I realized that the fans also loved the few historic concert recordings that I had put in Silver Edition and as a result I planned the release of another set with just historic music, played by Klaus long ago in his studio and in his concerts (mostly I speak of “our concerts”, because so often I was present and responsible for many things on tour and stage). The result of my search among all the old recordings was a second ten-CD set, Historic Edition which came out two years after Silver Edition. This outcome was another if not larger success.

Both of these sets we did (and we sold) on our own, without any record company and not through shops. I forgot how we reached our customers: after all, Silver Edition was three years before any fan could read about it in an issue of “The KS Circle” and even Historic Edition was out five months before any “Circle”. The official KS website started only in late August 1996, which was also too late to announce those first two important set. So, how we reached the listeners? Probably I did sent out personal letters to all the many kind people who had written letters to KS during the last one or two years. I collected these letters from the first day on I worked with Klaus Schulze. Luckily I had also collected all those old tapes!

Such a set with a 48-page booklet cannot easily re-pressed and re-printed, therefore we made them limited editions of 2000 copies each. It sounds crazy today, but for both sets we really had some trouble to get rid of the last one hundred sets each. Today they are collectors’ items and some people are willing to pay a fortune for a complete set. That’s the way the cookie crumbles.

During my research among the old tapes I found many other unreleased good recordings, hence we did a third set, again after two years, in the year 1997. This time we made it a package of 25 CDs with a thick booklet of 84 pages. We love to do things that were not done before, at least not in “our” music; but I was thoroughly familiar with big sets, thanks to my longtime interest in collecting jazz LPs. æ
Klaus D. Mueller, May 2009

DISC 1:
The four parts of “Film Musik” contain the complete music for the soundtrack to the 1993 German tv documentary “Spurensicherung. Baudenkmäler”,
DISC 2:
Klaus called the 71-minute piece “Narren des Schicksals” his first symphony.
It was recorded in 1992/’93 for no special purpose.
DISC 3:
Track 1, “Der Schönheit Spur”, is the longer version of the music Klaus recorded 1993 as soundtrack for a film about Berlin’s Potsdamer Platz, and the final track (“Return in Happy Plight”) is the remixed version which was actually used for the film. “Ein schönes Autodafé” was meant but not used as ballet music for Klaus’ opera “Totentag”. It was recorded during Klaus’ intense sampling era in 1993.