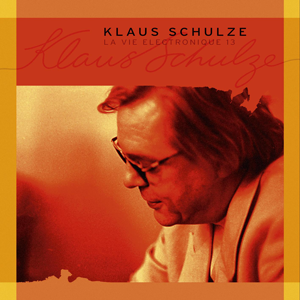 Disc 1, “Machine de plaisir”: The original tape of had the working title “Meditation 2″ and this long track was also recorded in 1993 for the “Guttemplers”, same as “The Music Box” in LVE 12. The feeling for time is so basic for Klaus’ work. His beat is as alive as his breathing. His rhythm is both, continually attentive and exceptionally well integrated, as you can hear in large parts of this track. There is a feeling of unhurriedness in his work and yet there is intensity underneath and through it all.

Disc 2: “Arthur Stanley Jefferson” was recorded in February 1993 in KS’ studio. Originally, it was the third free tape for the “Guttemplers”. “Himmel und Erde”, recorded by Klaus in January 1993, was first released on a Russian limited edition CD sampler in the same year, and seven years later I put it among the “Lone Tracks”, the last of the fifty CDs of The Ultimate Edition. Also from1993, “Vas Insigne Electionis” was especially done for a planned sampler, but not used then. One year later it was given for free to the Dutch KLEM organisation, who did a limited edition CD sampler for their members. Six years later I also added it to the “Lone Tracks” of The Ultimate Edition. The very short track “Tag des offenen Denkmals” (Heritage Open Days) was done as tv trailer for a tv documentary on account of the European Heritage Days. Klaus recorded it on the 21st of July 1993. This small piece was first included in our Jubilee Edition set in 1997.

Disc 3: ”Borrowed Time” was played and recorded by Klaus in 1993 and completed and mixed in April 1994 at his studio. The reason for doing this long music was because of the work on the soundtrack for the American-Hungarian movie “Living on Borrowed Time”. Just a few minutes of the music were actually used in the film (as well as some special – shorter – cuts, released as “Angry Young Moog” in Jubilee Edition). Normally, Klaus is not a man for short tracks, so for “Borrowed Time” he started to play, and as so often, he got lost, forgetting completely about the movie and its need for short pieces. Luckily he had not just played but also recorded the whole thing, and then he mixed and stored it… and three years after I could use it in Jubilee Edition.