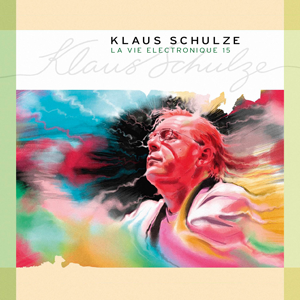 The Story Behind LVE

It is accomplished: After 5 years, 15 volumes, a total of 45 CDs and around 60 hours of music, the series „La Vie Electronique“ is coming to an end, thus painting the multi-faceted picture of Klaus Schulze’s work from 1970-1999.

This collection is not only free of samples, but is also a historical document of the development of electronic music: an instructional material and jewel.

How did it happen?
Unlike many of his other colleagues, Kraftwerk as an extreme example, Klaus Schulze never selected his work but rather always documented and released what we produced.

Next to his already successful albums and strictly according to Brian Eno’s motto (“Never delete anything,”) a vast number of sessions, performances, studies and parallel tracks were recorded and archived on many tapes over the decades.

To thank is his publisher Klaus-Dieter Müller, who sifted, organized and released these treasures.

It began in 1993 with the “Silver Edition”, continuing with the “Historic Edition” (1995), “Jubilee Edition” (1997) and the 50-CD Box “The Ultimate Edition” (2000). These editions were limited and most were completely sold out even before the release.

The downside of these editions is that they were not chronologically organized- a flaw that “La Vie Electronique” eliminated.

Next to the elementary tracks of past editions are never before released editions that round out the portrait.

In addition to that complete recordings were remastered and the sound raised to a modern level.

German artists such as Tangerine Dream, Kraftwerk, Neu! or Cluster created a genre in the 70s that was unique in modern German music history, without Anglo-American role models or inspiration. Instead it depicted an antithesis to Rock N’ Roll and for their part influenced a range of Epigoni in other cultural regions.

Not less interesting is the technical development. The first recordings were created under the simplest conditions (with a broken organ and a tape machine as a reverb device), the use of the diverse analog synthesizer over the clean digital phase to the perfect fusion of all this technology is documented in the later years.

With a lot more certainty the genuine artist without limits or formats meets the eagerness to experiment. This results in interconnected outcomes that are more consistent, colorful, and surprising.

Many albums within this collection, for example „Picasso geht spazieren“ (LVE 12) or „The Cello“ (LVE 15) have come to become the absolute Schulze-Fan favorites through the years. It retrospectively, heavily, and comprehensibly shows why these had never been released before.

Manual Instructions
What the inclined listeners strike next with “La Vie Electronique” is the sheer mass of the righteous.

Where should one begin?

Klaus Schulze himself suggests the following: Simply zap through the first time and hang on where you like the best.

In the diversity of the different phases of his work, it was quickly sifted out which sounds are intuitively inclined and which incoming work would inevitably spark curiousity.

The image will be expanded as such and the coherences and the development will be closed upon open ears and soul.

The valuable booklets and informative, detailed Linernotes are added as a guide and help.

And with this “La Vie Electronique” is an indespensible work for everyone interested in electronic music and its history!