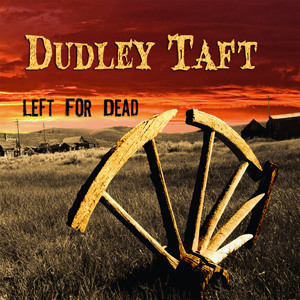 If you’re a member of the Taft family, you’re either going to end up becoming a politician, lawyer or a businessman. That has always been the case and was always supposed to stay that way for the descendents of DUDLEY’s great-great uncle William Howard Taft, who was the 27th President of the United States of America. On March 4, 1909, the former Secretary of War William H. Taft replaced none other than Theodore “Teddy” Roosevelt in the White House.
But if you believe that musician DUDLEY TAFT was not like anyone else in his family then you’d be very wrong. In 1886 his great-great uncle married the musician and author Helen “Nellie” Herron, which probably explains the element of musical talent the young DUDLEY was born with on July 4, 1966 in Washington. The fact that DUDLEY came into the world on Independence Day of all days shows that a real Taft is never born on a normal day of the year.
DUDLEY went to school in Connecticut and it’s not surprising that the school he attended was named after a member of the Taft family. But after that it was time for DUDLEY to put the gene he had inherited from his great-great aunt Helen to use – the youngest offspring of the Taft dynasty started to develop an interest in music. He mainly listened to seventies rock by bands like Deep Purple, Allman Brothers, ZZ Top and Foghat and was very much inspired by the blues. DUDLEY learnt his first chords on the guitar, mastered a few well-known riffs and started his first band with his friend Trey Anastasio (later Phish).

DUDLEY then went to college in California, but only for a short while until the birth of grunge attracted the future musician to Seattle. This is where he launched the band Sweet Water in 1990. Before the first album was released in 1993, they toured around the country with colleagues like Winger, Candlebox, Soundgarden and Alice In Chains and earned themselves an excellent reputation as a live combo. Sweet Water’s debut was produced by Don Gilmore, the hip sound was mixed in by Tim Palmer (Pearl Jam, Ozzy Osbourne) and released by industry giant Atlantic.
During recording for the second album DUDLEY TAFT left Sweet Water to set up the band Second Coming with Travis Bracht, Johnny Bacolas and James Bergstrom from Alice In Chains. The first single, strongly influenced by post-grunge, was released on Capitol and was an incredible success – two singles made their way to the Billboard Mainstream Rock Charts, the track “Unknown Rider” became the soundtrack to the Bruce Willis blockbuster “The Sixth Sense”.
Contrary to the band’s name, Second Coming, there was no more output from the band under the aegis of DUDLEY TAFT. This could not only be attributed to musical reasons, but rather the various changes to the management team of Capitol and the withdrawal of influence from chief executive Gary Gersch, who had personally signed the band at the time.
In the period that followed, also influenced by a meeting with Led Zep’s front man Robert Plant in Tim Palmer’s studio in London, DUDLEY went back to his musical roots from the early days in Connecticut – the blues. After starting out as an idea for a ZZ Top cover band, during his online research DUDLEY soon immersed himself in the blues cosmos of legend Freddie “The Texas Cannonball” King. DUDLEY reabsorbed the blues and quickly realized that this was also the only way to authentically realize his musical ideas in the future.
With Scott Vogel (drums, ex-Reverend) and Evan Sheeley (bass) in 2007 he founded the DUDLEY TAFT BAND. Three years later the band went into the studio and, together with John Kessler, DUDLEY produced the debut entitled “Left For Dead”.
The mix is unmistakable and harmonious – a little Texas blues, a hint of Mississippi Delta, seventies hard rock, old-school blues and the laissez-faire of grunge, completing the flirt with all genres, resulting in – the “Seattle blues”!
And as a bonus – an over 7-minute long, powerful, energy-charged cover version of the Led-Zep classic “When The Levee Breaks”.
A stylish homage to mastermind Robert Plant, who had guided him onto his musical path with encouraging words years ago.
DUDLEY is often in America with his friend Alan White, the drummer from the British progressive rock heroes Yes. “We do occasionally play Yes classics with a touch of the blues in them, just for fun,” says MR. TAFT. As he loves the stage and needs an audience, the DUDLEY TAFT BAND is already making plans for an extensive European tour, which, if possible, is set to take place this year. But before the time has come the restless DUDLEY is already working hard on his “Ponderosa” and in the studio on the successor to “Left For Dead”.