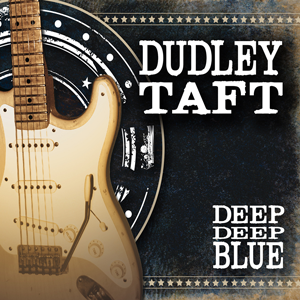 „Deep Deep Blue“ is the second solo-album from the American Grunge-Bluesrock artist DUDLEY TAFT after his successful solo-debut with „Left For Dead“.

DUDLEY TAFT about his new album:
“I think there is a lot of good stuff on there – more songs in the ‘Spaghetti Western’ style – “Bandit Queen” and “God Forbid,” a nice slow blues tune that has an edge – “Deep Deep Blue”, some funky blues “Feeling Good Now”, some Americana vibe “Wishing Well” and “Shanks Akimbo”, a couple of tongue-in-cheek pieces “The Waiting” and “Satisfy You” and a few covers of GREAT songs – Bob Dylan’s “Meet Me In The Morning”, Freddie King’s “Palace of The King” and Lou Reed’s “Sally
Can’t Dance”. Thanks to Lukas Nelson for playing “Meet Me In The Morning” at a show in Seattle – I never thought of that song in more of a blues/rock context. I took his version and then poured some gas on it. It’s hard to deny the fun of Freddie King’s boasting in “Palace of The King”! And who would have thought of doing a Lou Reed song on a blues album? Hahaha…It is so fun to play that one.”

End of May 2013 Dudley will come to Europe to do some shows in Holland and Germany. A bigger European tour is planned for autumn this year.