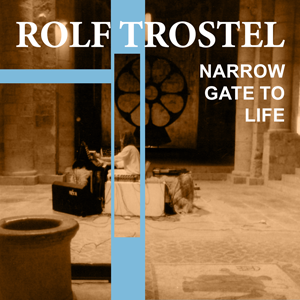 Ralf Trostel, electronic musician born in Berlin in 1956, was influenced by the “Berlin School”, by Tangerine Dream from their early years and of course by Klaus Schulze. From the end of 1979, Trostel worked with the Hamburg musician, inventor and sound tinkerer Wolfgang Palm (PPG) and tested the then new digital wave computer 360. The special thing about this instrument was its sound generation, wavetable synthesis, with the help of which it was possible to create completely new kinds of electronic sounds. From then on, Rolf Trostel used the PPG Wave for his studio and live productions. In his active phase as a musician, Trostel released only four albums, and in the 1990s he left the scene for “private life”.

“There are 19 years between the live concert in 1983 in Girona, Spain with the title “Narrow Gate To Life” and the composition “Kyrie 777″ in 2002. The two titles are linked by the approach of expressing biblical themes with the then contemporary electronic music of the so-called “Berlin School”. While the live concert in the imposing Romanesque church of St. Pere de Galligants in Girona was thematically about Job’s suffering and his belief that his Redeemer lives, “Kyrie 777″ with its Gregorian chants was intended to describe the Redeemer himself as the “agnus dei” (Lamb of God). I am pleased that these two titles are now being re-released in context as sacred electronic music.”

Bernd Kistenmacher, German electronic musician and once head of the Musique Intemporelle label, which first released “Narrow Gate To Life” on CD more than 26 years ago, about the re-issue:

“If you really want to enjoy “Narrow Gate To Life”, you should take your time. Especially the title track promises a mystical journey that is truly beautiful and not of this world. A gem in a world full of musical trivia.”