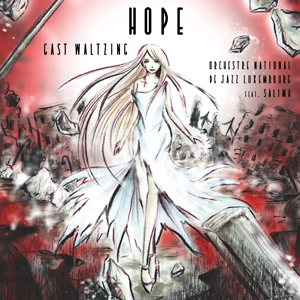 The founder of the Orchestre National de Jazz Luxembourg, the music professor, trumpeter, conductor, composer and Grammy Award winner Gast Waltzing, composed the songs of the orchestra’s new album “Hope”. The American singer and songwriter Maggie Parke, wife of Gast Waltzing, wrote the lyrics. Waltzing became famous as the composer of numerous title melodies for television and movie productions (such as “Die Dunkle Seite des Mondes (The Dark Side Of The Moon)”, the film was nominated for the Art Cinema Award and the German movie award Lola, “The Point Men” starring Christopher Lambert, “Polizeiruf 110″ or “Küstenwache” for German national TV-stations ARD and ZDF). The project “Hope” is particularly dear to Gast Waltzing, as it is – after several years in which he mainly worked with and for other international artists – his first personal musical statement, a kind of homage to the golden era of Big Bands and their divas from Ella Fitzgerald to Nina Simone or Aretha Franklin. “Hope” is also a very individual homage as it is soaked with Waltzing’s wide-ranging influences – from Blood, Sweat and Tears, Peter Herbolzheimer’s Rhythm Combination & Brass to Duke Ellington. The album’s message: defying pessimism.

This message is also perfectly portrayed on the record cover, in the manga style of the young Luxembourg artist Sabrina Kaufman: a young woman emerges from the burning ruins of a destroyed world and embodies the new HOPE.

A real discovery on “HOPE” is the singer Salima, whose extraordinary and powerful voice fills the message of the album with soul and sticks out with thrilling scat singing fused with the brass section.

“HOPE” is ambitious, compact big band music in which soul, rock, funk, jazz and fusion are equally important and in which jazz quality and commerciality harmonize perfectly together.