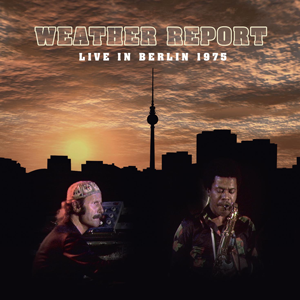 To commemorate the 40th anniversary of the founding of Weather Report, the Zawinul estate is proud to release this live document of the supergroup‘s appearance at the 1975 Jazztage Berlin, one of the oldest and most prestigious jazz festivals in Europe. From the opening strains of Wayne Shorter‘s propulsive „Freezing Fire“ to Joe Zawinul‘s exotic „Badia“ (a template for the world music movement that would come over a decade later), live in Berlin, 1975 crackles with an audacious spirit of discovery and daring, underscored by an uncanny sense of group-think that allowed the band to be truly in the moment from tune to tune, from bar to bar. as Zawinul once famously said when he and Shorter formed the band in 1971: „we always solo and we never solo.“ It was a perfect dictum to describe Weather Report‘s modus operandi and it became the band‘s mantra up until they disbanded in 1985.

This method of organic collective improvisation was described in detail by author Mark Gridley in his book „Jazz Styles: History And Analysis“: „Weather Report explored an unusual approach to combo improvisation. Instead of adhering to roles consistent with bop formulas, the instruments in Weather Report were played in highly interactive ways. Spurts of melody might come from any member, not just from the sax. Rhythmic figures and fills could also be produced by any member, not solely by the drummer.“ But perhaps Dan Morgenstern put it best in his five-star review in down beat of Weather Report‘s self-titled debut: „the music of Weather Report is music beyond category. All I can add to what has been said by the men who made it is that is seems to me music unlike any other I‘ve heard, music that is very contemporary but also very warm, very human, and very beautiful.“

By 1975, the Weather Report lineup was solidly locked down by the formidable rhythm section of electric bassist Alphonso Johnson, drummer Chester Thompson and percussionist Alex Acuña. Philadelphia native Johnson had replaced original Weather Report bassist Miroslav Vitous the year before and appeared on the group‘s 1974 recording, Mysterious Traveller, which was more grounded in funk grooves than previous Weather Report outings. This was definitely the direction that Zawinul wanted to head into with the band. As he said at the time, „Miroslav accepted that he couldn‘t play funk. But Alphonso was a tremendous young bass player. I liked him immediately – he had a solid beat.“ Johnson had been playing with the Chuck Mangione Quartet when he got the call from Zawinul to audition for Weather Report. His audition actually turned out to be a recording session in Los Angeles for Mysterious Traveller. There were two drummers on that album, Skip Hadden and ishmael Wilburn, who combined funk-rock and swing patterns into an intriguing latticework pattern of rhythm. And Johnson supplied the deep groove underneath with his resounding and funky bass lines.

For Weather Report‘s 1975 followup ,Tale Spinnin‘, they employed Santana drummer Ndugu Chancler, whose powerful polyrhythmic approach to the kit fueled the session. Not wanting to leave his comfortable position in the mega-selling rock band Santana, Chancler turned down an offer to join Weather Report and go out on tour with the band. Shorter, having played with the great Art Blakey during his Jazz Messengers days and with Tony Williams during his tenure with the Miles Davis Quintet, was very particular about drummers and frustrated that Chancler chose to remain with Santana rather than join Weather Report. Zawinul too was very hard on drummers and needed to have that fire coming from the drum kit. Both co-leaders eventually found the perfect drummer for Weather Report when they recruited Chester Thompson from Frank Zappa‘s band. A player of tremendous power and precision on the kit, Thompson fit right into the heavy groove-oriented formula of this new edition of Weather Report. Zawinul augmented Thompson‘s propulsive approach in the rhythm section with Peruvian percussionist Alejandro (Alex) Acuña for the 1975 European tour. Weather Report comes bursting out of the gate with a vengeance on Shorter‘s „Freezing Fire,“ which kicks off this Jazztage Berlin concert. Johnson puts up an insistent, urgently funky and edgy groove underneath the sizzling opener, simultaneously driving the fusion juggernaut and bringing out the best in Zawinul‘s adventurous keyboard work and Shorter‘s searing soprano sax playing.

Next up is the ominous-sounding „Scarlet Woman,“ an atmospheric number from mysterious traveler that was jointly composed by Johnson, Zawinul and Shorter. Johnson dials up touches of nasty distortion on his bass lines here, applying a dramatic exclamation point in just the right places. Shorter remains on soprano sax and blows searching lines over the spacious groove while Zawinul relies on woody flute timbres and other expressive and sometimes otherworldly sonic textures to enhance the ethereal vibe of this haunting piece.

On Shorter‘s „Mysterious Traveller,“ the hard-hitting title track to Weather Report‘s 1974 album, Johnson kicks on his distortion pedal and takes the band into hyper-drive with his muscular funk bass lines. Shorter switches to tenor sax and unleashes on this swaggering anthem while Zawinul comps aggressively on a grunge-laden fender rhodes electric piano behind him. The whole band stretches out considerably on Zawinul‘s „Badia,“ a 20-minute musical journey that begins with a whirlwind percussion solo by Acuña and leads into an interactive dialogue with Zawinul before the whole band takes up the melodic theme at the 3:20 mark. Over the course of this evocative tone poem, a kind of extended companion piece to Zawinul‘s in a silent way,“ Johnson turns in a turbulent fuzz bass solo and shorter probes deeply on soprano sax while Zawinul conjures up weird on wonderful sounds on his keyboards. Midway through the piece, Joe shifts to acoustic mode and delivers a rare two-minute unaccompanied piano solo that cascades like water flowing down a mountainside.

Shorter then engages Zawinul with his tenor sax for a few choruses before the band returns to the uplifting theme that is part African, part Middle Eastern, part „mercy, mercy, mercy,“ Joe‘s soul-jazz hit from 1966 with Cannonball Adderley. with Shorter switching to soprano sax and blowing with fiery abandon, Zawinul wails on synths over a throbbing groove created by Acuña, Thompson and Johnson. The dynamic piece builds to a crescendo of runaway train intensity, bringing this amazing set at Jazztage Berlin to a frenetic close.

Listening to this music more than three decades later, it still sounds as fresh and invigorating today as it did back in 1975. It‘s a vital addition to the Zawinul legacy and another example of Weather Report‘s importance in the development of jazz during one of the most turbulent and adventurous periods in its history. – Bill Milkowski