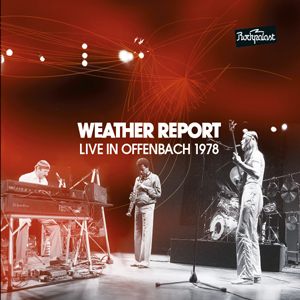 To commemorate the 40th anniversary of Weather Report the Zawinul estate is proud to release this live document of the band‘s performance in Offenbach, Germany, on September 29th, 1978. Available in separate DVD and (previously unreleased) CD versions, the recording features arguably the most individual group ever to mix elements of jazz, rock and electronics and they‘re captured here at their absolute best. Led by two musical visionaries, pianist and keyboard player Joe Zawinul and tenor and soprano saxophonist Wayne Shorter, the group was also unique in that it eschewed the then fashionable guitar.

Also on board were flamboyant electric bassist Jaco Pastorius, a genuine innovator, and newly arrived drummer Peter Erskine a master technician brought into the group to add more of a jazz feel. Prior to this line up an additional percussionist had always been present but this auxiliary role was dropped to allow greater space in the music. Until now documentation of this quartet has been via the live album „8.30“ released in 1979 and mostly recorded at Long Beach, California, in November of the previous year.

The original plan was this would be a double LP of concert material but as certain tracks were accidentally erased in the final stages of production a decision was taken to include four new studio recorded compositions instead. With the release of this music Weather Report fans are now treated to an entire concert akin to that intended (restraints of vinyl permitting at that time, of course) and arguably get to hear (or view) a better performance in Offenbach, too. Maybe it could be said then that this recording is actually the album that „8.30“ should have been? Peter Erskine, for one, is quoted as thinking very highly of the Offenbach concert.

By September of 1978 Weather Report‘s headlining status afforded them the opportunity to play a very long set amounting to two hours in length. Given the previous year‘s success with the poll winning „Heavy Weather“ album one might have expected them to concentrate on this more or less exclusively, but instead, fans were treated to material from right across the bands career and solo spots by everybody. „Black Market“ opens this concert and straight away it‘s apparent that the energy level is high and the relaxed pace of the studio version has been superseded by a slightly faster tempo. An explosive tenor and drum duet by Shorter and Erskine also forms part of this and must have surely put an end to the feeling in some quarters at the time that the saxophonist was no longer at his best. The atmospheric „Scarlet Woman“, which follows, was co-penned by Zawinul, Shorter and previous bassist Alphonso Johnson and had been in the bands book since 1974.

After the fireworks of the previous track the focus now shifts to Zawinul‘s lyrical synthesiser solo underpinned by Pastorius‘ rumbling bass. The dry ice and siren effects that conclude Zawinul‘s introduction to this piece parallel stadium rock of the time, and, whilst it may have impressed some in the now larger crowds that attended these concerts, this, like the solos for bass and drums, did not win over everybody. „Thanks for the Memory“, another solo outing but by Shorter this time, is part whimsy, part deconstruction and like Zawinul‘s interpretation of Ellington‘s „I Got It Bad (And That Ain‘t Good)“, is more successful. When this concert was recorded one of Weather Report‘s more controversial albums had not long been released, the production heavy „Mr. Gone“. Largely conceived as a solo outing by Zawinul, it famously received a one star rating from Downbeat. Concerts in the autumn of that year included four numbers on this contentious recording: „Young and Fine“, „The Pursuit of the Woman with the Feathered Hat“, „River People“ and „Mr. Gone“.

As seemingly unpopular as this material was – all of it was dropped from the band‘s set by the time of their summer tour of 1979 – it‘s interesting to note now how different these tracks are from each other in compositional style, and, with hindsight, perhaps reflect that they did add something distinctive to the 1978 shows. Certainly there‘s no lack of passion in their performances in Offenbach (witness this on the DVD) including Zawinul‘s somewhat unique „Young and Fine“ with its upbeat carnival feel and trademark Pastorius bass slurs.

Two other tracks from „Mr. Gone“, the title track and „The Pursuit of the Woman in the Feathered Hat“, were also from Zawinul‘s pen, and, with their multi-layered keyboard approach, they closely reflected the album‘s genesis as a solo album. In Offenbach, „Pursuit“ has saxophone and bass in rather under-utilised roles yet paradoxically „Mr. Gone“, which paved the way for future electric bop outings such as „Night Passage“, sees both Zawinul and Shorter leave the tightly knit confines of the original and stretch out to good effect. In addition Pastorius‘ presence added a valuable third composer to Weather Reports ranks, of which „River People“, with its bubbling unison bass and synthesizer lines, was a fine example of his writing style. „In A Silent Way“ and „Waterfall“ finds the band looking back to its earliest days so, along with the new repertoire, there might have been concerns within the audience in Offenbach that the hit album „Heavy Weather“ might be forgotten.

They need not have worried. Weather Report‘s eighth album, which went on to sell a remarkable 500,000 units, was represented by three numbers, „Teen Town“, „A Remark You Made“ and, of course, the joyous „Birdland“. „Teen Town“ is a feature for Pastorius‘ incredible double-time bass playing and yet in its original version it‘s all over in less than three minutes! Here it undergoes a dramatic transformation with its main themes played twice and a surprising change of direction to end the piece. Pastorius and Erskine are clearly in the driving seat here (the tag seems to allude to the bassist‘s „Barbary Coast“) but also listen to Shorter‘s wailing soprano and Zawinul‘s audacious bass commentary and synth stabs. Should anybody actually need proof that Weather Report were still a valid improvising unit in 1978 they should start here. One of the standout tracks from this concert is Zawinul‘s „A Remark You Made“. Its structure is unusual and yet it‘s one of the most attractive and moving pieces in their entire repertoire. Clearly built to showcase Shorter‘s tenor, it also includes a rhapsodic acoustic piano interlude and beautiful melody statements from Pastorius which influenced many bassists‘ playing in both the jazz and pop worlds.

It‘s a joy to actually see him play these lines on the DVD version of this recording. Not surprisingly, there‘s a big cheer from the packed crowd in Offenbach when Zawinul and Shorter‘s affecting duet version of „The Midnight Sun Will Never Set On You“ moves to the low, booming, synthesiser tones that signal the start of „Birdland“. Zawinul‘s dedication to the New York club is still Weather Report‘s best known tune and its success was, of course, down to that melody but also (lest it be forgotten) the sheer musicality of the composition. In concert the band performed this with aplomb, not an easy thing to do as the original piece included a multitude of difficult keyboard parts and was problematic rhythmically. One would have thought that this hit song would conclude matters.

But no, with the band‘s stamina pushed to its limit, they return to perform „Elegant People“, a Wayne Shorter composition with a beautiful melody underpinned, of course, by ever resourceful playing by Pastorius and Erskine. „Badia“, that magical theme which hints at some unspecified eastern location, actually does bring proceedings to an end but not before the tempo is upped and Zawinul weighs in with some masterful keyboard soloing. Joe Zawinul was keen to stress that Weather Reports music was their music, a product of the group‘s identity, and not simply jazz-rock akin to that of many bands of the time. Although he was known for his strong opinions it‘s clear that no other group mixed improvisation, formal structures and electronics quite like them. One night in Germany is clear proof of this.