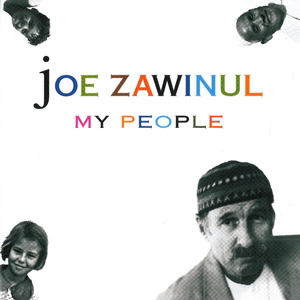 Long before the term “World Music” was coined, Joe Zawinul – renowned for his artistry as co-leader of Weather Report, leader of the Zawinul Syndicate and for performances with Miles Davis and Cannonball Adderley – was a multi-cultural artist. In the early years of Weather Report, the seminal jazz/fusion band that keyboardist-composer Zawinul formed in 1970 with saxophonist-composer Wayne Shorter, the artist sometimes described their unique sounds as “folk music of the 90´s” and the group featured players from Europe, South America, the U.S. and other climes.

Zawinul calls My People “an ode to the world, music to lift everybody up.” The recording is a vivacious mixture of instrumental and vocal music, an album of songs with ethnic origins in Africa, South America, the Caribbean but which ultimately have a universality anyone can relate to. Definitely pleased with My People, Zawinul calls it “a hip, soulful album that you can dance to.”