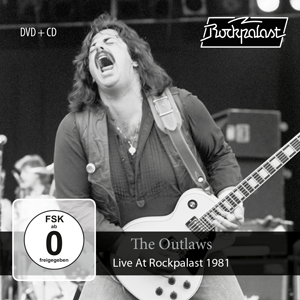 After the great success of their current album “Dixie Highway”, which also entered the sales charts here in Europe in spring this year, THE OUTLAWS will now release their first legendary German show at the Rockpalast on the Lorelei on 29th. Aug. 1981.
That night THE OUTLAWS line-up was Freddie Salem (guit./voc.), Hughie Thomasson (guit./voc.), Billy Jones (guit./voc.), David Dix (drums) and Rick Cua (bass).
39 years later, none of them is in the current line-up of the band anymore. Billy Jones died in 1995, Hughie Thomasson followed him 12 years later. David Dix was an OUTLAW until 2008, Rick Cua from 1981 to 1984 and Freddie Salem from 1977 to 1984.
THE OUTLAWS have always been a fantastic live band, and a very loud one at that.
Guitarist Freddie Salem remembers: “Speaking for the other Outlaws and myself, after playing in thousands of shows for thousands of people, Lorelei Germany and The Rockpalast concert will always remain a wonderful and ongoing memory in our career!
It was a beautiful day in Loreley and the sold-out crowd came to rock as German audiences always do. There were also a sizeable amount of US servicemen, that were stationed in Germany in attendance. This crowd was revved up and ready to go.”
The Outlaws Rockpalast CD/DVD will be released on 25th. September 2020.