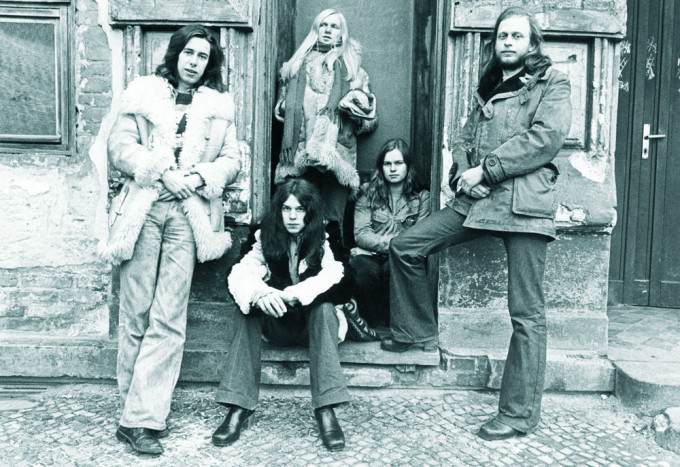 On October 28, 2016, MIG Music will release a new box with rare material and new live DVD of AGITATION FREE.

The band is a living legend. Since their break up in 1974 the band which was internationally just as influential as Can or Neu! had made itself scarce. Now the original members are playing occasional concerts again, and they have not lost a bit of their fascination. AGITATION FREE now considered as a krautrock phenomenon, has always been inspired by a wide range of influences. The band’s debut album i.e. is characterized by oriental sounds, which the group brought home after a Middle East tour. A friend of the band, Alfred Bergmann, who knows them since their school days remembers that the band was wild and chaotic in the beginning, drifting towards a peak in the improvisation ; later, more modern e-music elements were forged in like from Karlheinz Stockhausen (who was seen at a Jefferson Airplay concert during his time as a guest professor at Berkeley, according to “Krautrocksampler” author Julian Cope ). Popular and Modern Classical music influenced each other during this time.

The band broke up after just two LPs and the musicians went in different directions. They worked with Tangerine Dream, Guru, Guru, Ash Ra Tempel, with Nico, Shirley Bassey, Nena, 17 Hippies or as movie score composers.

The albums “Last”, “Fragments” and “Live ‘74” being part of this box, feature previously unreleased material. In 1999, the band finally released a third studio album. When the band got together again in 2007 with the original members, the impulse came from far east. AGITATION FREE played their first concerts in over three decades in Tokyo, Japan. Japanese fans worship the musicians and welcomed them like superstars. You can even find their figures in the Tokyo wax museum. The fourth disc on this release is from this phase. The first DVD of the band was recorded in 2013 during a show at the Kesselhaus in Berlin. The DVD shows how relevant AGITATION FREE are even nowadays.

In the words of British journalist Rob Fitzpatrick: “For here is a truly cosmic music, a blend of krautrock, psychedelia, jazz and a strikingly well-structured ambient sort of funkiness that can only come from fantastically talented musicians.” (in: “The Guardian”, 2013)