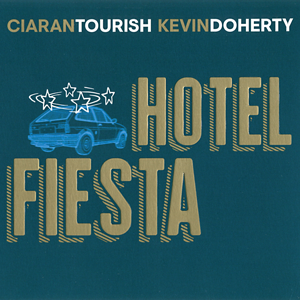 PRINT Cover (4.0 MiB, 0 hits)
You do not have permission to download this file.

Presskit PRINT (4.3 MiB, 0 hits)
You do not have permission to download this file.

Presskit WEB (2.0 MiB, 1 hits)
You do not have permission to download this file.

First collaboration of two popular icons of the Irish folk rock scene. For 27 years Ciaran Tourish was a member of the Irish roots folk rockers Altan, with whom the violinist and multi-instrumentalist recorded 10 successful albums. Also Tourish is a sought-after session musician on the Green Island. He has worked f.e. with Matt Molloy, Mary Black and Dolores Keane (De Dannan); Alison Krauss sang lead and harmony vocals on Tourish’s first solo album “Down The Line” (2005) while her brother Viktor contributed the bass. Singer and guitarist Kevin Doherty comes from Four Men And A Dog. The Irish roots rockers recorded two of their 6 albums in the studio of Levon Helm at Woodstock/NY, other members of The Band like Rick Danko, Randy Ciarlante or Gath Hudson insisted to accompany Kevin Doherty and his Irish colleagues in the studio. And so it’s not surprising that Tourish and Doherty oscillate between traditional Irish Folk and Americana on their first joint album. It’s exactly this mixture that makes “Hotel Fiesta” so appealing and gives it its peticular charm. Between Jigs and Reels and Dylan’s “Boots Of Spanish Leather” Tourish and Doherty succeeded in creating a very atmospheric, partly musically almost intimate album. Nevertheless or just because of that they deliver a potential radio hit with the Tex-Mex inspired “Who Can I Turn To?”, which would also doing very well on any Mavericks album.