From the photo album of AGITATION FREE pt. 3 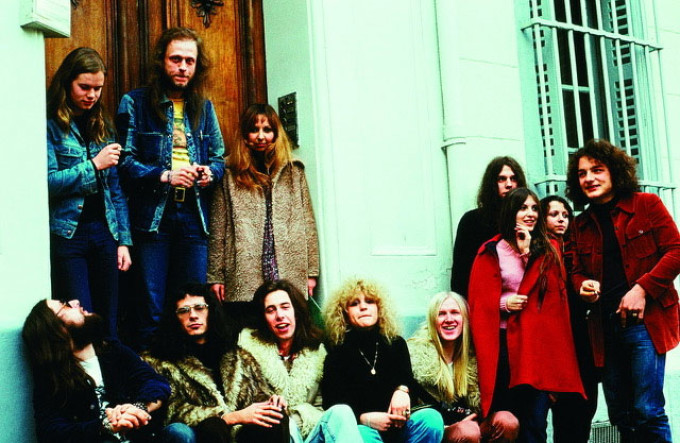 Countdown to the release of the new Agitation Free Box on Friday, Oct: 28, 2016. Every day there will be a new photo from the bands’ history. Today it is a memory picture of Marseille from 1974.

In the upper row: Gustl Lütjens and Burghard Rausch; all ladies are female fans who used to call themselves at that time “groupies”.

Lower row from left to right as Lutz Ulbrich remembers: “Bodo (roadie), Assaad Debs (manager), Michael Hoenig, a fan, then I, two more fans, one of whom was called Giselle but which? Behind them stands Michael Günther alias Fame, then some guy, might have been the local promoter? The picture was taken in Marseille.”

In the meantime there had been another personal change: For Joschi came guitarist Gustl Lütjens. As Michael Günther wrote in his notes: “On  January 18, 1974 we were going to France again. From Troyes via Rennes to Brest, where we were received by friends.  Unfortunately we did not have any dope on us this time. Then we travelled to Nantes, Clermont Ferrand, Marseille where it was already wonderfully warm at this time of season, and we met nice girls. Last came Montpellier und Lyon.” Unfortunately there was a problem with the tour truck.

“On our way to the hotel the gas pedal broke. Höni sat behind the steering wheel while somebody else had to press the pedal by hand on verbal command. Sh…, how repair that? But that was no problem for our super roadie Klaus D. Müller, former Ash Ra Tempel. How many times we would have been in trouble without him? And once again, he lived up to his reputation as a warlock.”