From the photo album of AGITATION FREE pt. 1 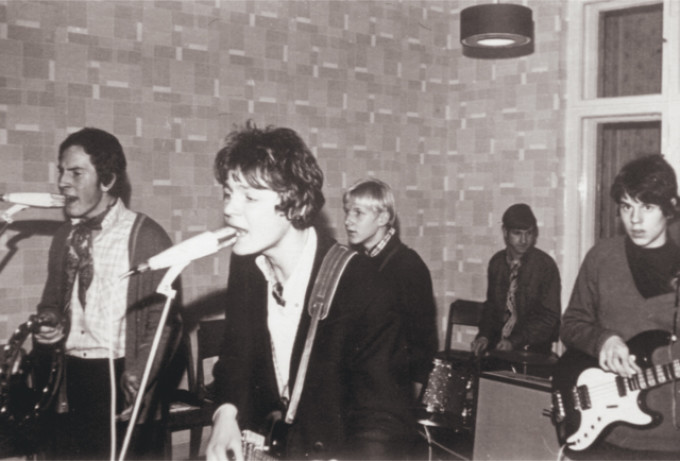 Countdown to the release of the new Agitation Free Box on Friday, Oct: 28, 2016. Every day there will be a new photo from the bands’ history. Today, we start where it all began:  In the year 1967, in a rehearsal space in Berlin-Charlottenburg, Am Karolinger Platz. Caught in the act by an unknown photographer is the very first version of AGITATION FREE – then only without the “free”. From left to right that are Michael Duwe, Lutz Kramer, Lutz Ulbrich, Christoph Franke, Michael Günther.

The latter, Michael Günther, nicknamed Fame, was the original bassist. He took down in writing his personal memories before he died in 2014, thus giving us a vivid impression of the days back then. On the photo next to him: Christoph Franke, dr, called Chrille, switched over to Tangerine Dream in 1970. Lutz Ulbrich (thanks again for your help!) is better known these days under his abbreviated name Lüül, solo and with band, as a book author as well as a member of the 17 Hippies. Lutz Kramer, called Ludwig, left the band in 1970 and goes to the band Walpurgis. Michael Micki Duwe had already performed in the Berlin staging of the musical “Hair”. He switched to Ashra Tempel, then Metropolis and later Mickie D’s Unicorn.

As most of the young bands at that time, as Michael Günther writes, they “mainly played R&B or pop songs. That, however, proved to be musically unsatisfying most of the time. Merely the parts where we could improvise which came in nearly every tune we took pleasure in. That is why we started extending these parts further and further. I recall a song by the Rolling Stones, 2120 South Michigan Avenue or so, that we enjoyed playing very much. So, in the course of our playing mood this song became longer and longer. Later, our friend Rolli stood next to the stage with a stopwatch in hand and signalled us the length: Ten, twelve or more minutes we played, and he really loved that. I guess we must have played up to twenty occasionally. Boy, were we happy. To play for such long time and especially to improvise, that we loved the most because it was so different from all the other records you could hear then.”