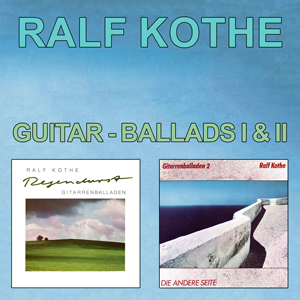 Ralf Kothe studied music in East Berlin, graduated as a music teacher for guitar and composition, is a sought-after studio musician as well as a composer and arranger of numerous film scores and advertising trailers. In 1987 Ralf Kothe released his first instrumental album “Regendurst (Gitarrenballaden I)” on the state-run GDR label Amiga, followed by his second Amiga production “Die Andere Seite (Gitarrenballaden II)” shortly before the fall of the Berlin Wall in 1989. With “Windzauber” a third album was released in 1994 on Kothe’s own label. To this day Ralf Kothe is active as a composer, music producer, guitarist, studio musician, and music educator. From November onwards, the two guitar ballads albums are available again, as a 2-CDs-set with plenty of bonus material as well as detailed liner notes of the artistic life of Ralf Kothe. Just the right music to bring some light into gloomy November days.