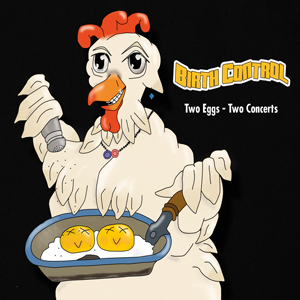 Founded in 1968, Birth Control ranks among the spearheads of “Krautrock”, a pigeonhole where they – like many other bands of the era (i.e. Karthago) – felt they did not belong because their music rather followed Anglo-American influences. But if you take the label “Krautrock” (that had been invented by the English to cast a slur on the emerging competition from Germany) as an expression of zeitgeist, creativity and having the guts to experiment, it fits wonderfully to Birth Control. Atmospheric long and boundless solo passages were another sign of this time. Birth Control created one of the greatest “Krautrock” anthems entitled “Gamma Ray after all.
The live material of this double CD is remarkable in many respects. The live recordings of CD 1 took place on May 1, 1977 at the city hall of Korbach in Northern Hesse presenting on bass for the first time Horst Stachelhaus who was deemed to be one of Germany’s most renowned musicians at that time. Further noteworthy is the unusual track “Meta Ventilator” that has been receiving a lot of attention by the fans. Up to now only available on the Limited Fanclub Edition “Live Abortion” (1.000 copies) it was remastered and is to be heard in the more than 22 minutes version – including the striking bass solo by Horst Stachelhaus at the end.
CD 2 contains a concert at the Hamburg Fabrik of March 24, 1983. It could have been called “Bäng live” as well because the band played nearly all of the tracks of the 1982 studio album. The former Dierks-Studios technician and fan of Birth Control, Erhard Schulz (Erhard Batka today) got a 4-track recorder for the show and spontaneously travelled with the band in order to capture the live energy that he had sensed before during their studio sessions. Unfortunately, it was one of the last performances by guitarist Bruno Frenzel who died after a severe illness in September the same year. With him, Germany’s rock music scene lost one of their most innovative musicians and songwriters. Finally Bruno’s death led to the provisional break up of Birth Control in 1984.
It took nearly a decade until Nossi’s reformed band Birth Control started their remarkable resurrection with a concert at Balver Höhle in August 1993.