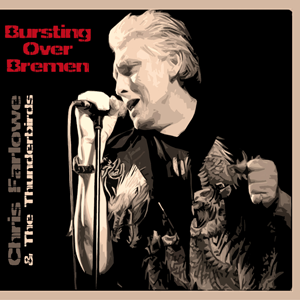 No, Chris Farlowe can no longer remember Schauburg in Bremen. But when he heard the recording from the 7 October 1985 concert, the brain of the “Thunderbirds” was astonished and impressed: “I didn’t know how good we were!” Not only was the 5-piece band in peak form, but so was the singer. Due to its sharp quality the Radio Bremen recording was just as impressing. The Repertoire was a magnificent mix of blues, rock, and rock ‘n roll, given how enthusiastic the audience’s resonance was. “My personal favorite is ‘Jealous Kind’” revealed Farlowe.  Between the openers “Watching the River Flow” by Bob Dylan and the encore “Going Back to Louisiana”, several official interpretations by classic musicians can be found. Interpretations that even top the originals! The 13-minute “Stormy Monday Blues” is perhaps the highlight of Farlowe’s gig and can be found on the first 1966 Thunderbirds album.

Chris Farlowe was born as John Henry Deighton on 13 October 1940 in Islington, London. He came in touch with jazz and blues through his parents. “My mother always supported me. She was a great woman. She played piano and when I was a kid I sat by her side and listened to her.” Farlowe recounts. His first idols were astonishing singers such as Sarah Vaughan, Dina Washington and Ella Fitzgerald. On the contrary the relationship with his father proved to be difficult: “My father was a soldier during the Second World War. When he came back, he was a broken man. For him it was unacceptable that I wanted to be a musician. Even when I became successful, he did not accept that.”

Farlowe’s awaiting success loomed in the beginning of the 60s with his sensational live performance at the Flamingo Club. Alongside his studies at the Sir William Collins Technical College and still using his birth nam, he was part of the John Henry Skiffle Group. His first solo single “Air Travel” appeared in 1962 but failed. Around the same time he formed “Thunderbirds”, whose first LP was released in 1966. The line-up still looks impressive today: Albert Lee, Dave Greenslade and Carl Palmer. Farlowe still pursued different paths in the same year and released, through the legendary Immediate label, an extraordinary interpretation of “Out of Time” by Jagger/Richards and was personally produced by Mick! The single immediately climbed to the top of the charts. His versions of “Handbags and Glandrags” written by Mike D’Abo, and “Yesterday” by Lennon/McCartney were just as successful.

Despite this success Chris Farlowe was far from being the prototype of a popstar. He placed more worth on recognition from musicians and the jazz and blues scene. This is how he joined the fusion band “Colosseum” in 1970. There, he shared the stage with admirable instrumentalists such as drummer Jon Hiseman and saxophonist Dick Heckstall-Smith. In 1972 he gave a guest performance as the singer of Atomic Rooster. In April 1978 Farlowe was one of the top-class acts at the blues pioneer Alexis Korner’s 50th birthday party, whose “Party Album” can be heard along with Eric Clapton. In 1981 he made “Olympic Rock & Blues Circus” with Pete York.  Through the initiative of producer Mike Vernon a new edition of Thunderbirds came into existence in 1984. The album “Out of the Blue” generated a buzz and served as proof that the band had a lot of potential. In the year that followed Chris introduced his new formation to Germany. During this tour a concert was recorded and four titles under the name “Live in Hamburg” were released. But for the first time today an entire Thunderbirds show will be released as an impressive double album. Chris Farlowe’s Thunderbirds consisted at the time of keyboarder Tim Hinkley, guitarist Mo Witham, bassist Tex Corner, drummer John “The Figure” Palmer, and saxophonist Martin Winner. Aside from the instrumental “Time is Tight” by Booker T., the repertoire consists of vocal performances honoring his voice acrobatics. His a capella version of Randy Newman’s “I Think it’s Going to Rain” sounds just as impressing as the interpretations of the classic “Ain’t No Love in the Heart of the City,” “Watch Your Step” or “Shakey Ground.” After an hour and a half of the Thunderbirds one can only say: “The thrill is not gone, Mr. Farlowe!”