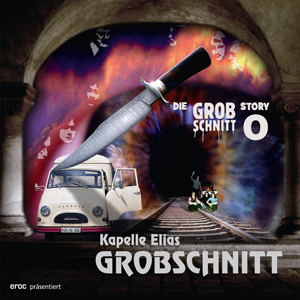 It all began at the Altenhagen high school. Gerd (always called Lupo) and Achim (later called Eroc) were sitting next to each other. Gerd helped Achim in maths, Achim helped Gerd in English and sometimes they were fighting with each other. At these times the teacher had to place them apart. Anyway, Achim was the first in class to call two tape-recorders his own and Gerd was the first who owned a moped. Not long after this Gerd did the first at school own an electric guitar and Achim to have a drum kit in his possession. That lead one year later to the formation of a band with other classmates, which Achim entitled “The Universals” in 1965 and later on “The Crew” in the summer of 1966 .But that’s a different story to be told another time…

After “The Crew” was history in autumn 1969 two new bands hit the scene: guitar-player Lupo founded “Charing Cross” together with bassist Urmel (later called Baer) and drummer Felix, who were devoted to the a bit more heavy style. Their concert-poster soon caused a sensation and lead to heated debate especially within the clerical area. But in the “wild phase” of the late 60s provocation and opposition was a matter of daily life. Former Crew members Achim “Eric” and Peter Klassen founded together with Michael Barth and Carlos Böttcher “Wutpickel” (Pimple of Anger), a kind of free-jazz consortium, which lay its main emphasis on spontaneous improvisation and happenings.

At the time when Charing Cross hit the stages in and around downtown Hagen and sometimes also in the Munsterland, Wutpickel held many “sessions” at the THG assembly hall and celebrated together with guitar-player Hans Reichel and violinist Georg Witte a legendary concert in December at the “Jam” jazz-club in Wuppertal.

By end of 1979 Wutpickel was history as well, and “Achim” Eroc met with his old friend and Crew-singer Stefan (later called Wildschwein) to scheme and plot new plans. Lupo still was touring with his Charing Cross and so they joined a round table with the result, that Eroc and Stefan joined this band in February 1971. Charing Cross now consisted of the musicians Baer, Lupo and Stefan, who went on stage together with the two drummers Felix and Eroc, a rather unusual constellation at that time, which was at least in Germany may have found its only precedence in Amon Düül.

From the beginning two regular listeners joined the rehearsals at the THG assembly hall in Hagen: Rainer “Der kleine Mann” (the little man, later called Toni Moff Mollo) and his friend Ralf (later called John McPorneaux). One day Rainer turned up with a photograph showing the “band” of his grandfather. Those gentlemen were active in 1915 in and around the city of Hagen under the name “Kapelle Grobschnitt” playing on self-built instruments. Of course that photo impressed everyone and after some to and fro the decision was made to continue from now on as “Kapelle Elias Grobschnitt”. Since the band went on stage as Charing Cross on 4th of April in Rheine, as printed in the Steinfurter Rundschau, whereas on the 15th of May it performed under the name Kapelle Elias Grobschnitt in the city of Hagen at the HDB, as announced in the Hasper Zeitung , the foundation of Grobschnitt in its own sense has to be dated back to May 1971, although this particular name was accepted just one year later in April 1972, when the first album was released, as explained below.

Consequently “the Elias was in action” and did a numerous performances, of which the gigs at e.g. Jugendheim Buschey in downtown Hagen (today called “Kultopia”), at the HDB, the Jugendheim Haspe , in the “House Of The Opened Door” in Rheine, at the disco “Old Lady” in Mesum, in the town halls of Wetter and Letmathe, the legendary concert in the Volkspark in Hagen in September 1971 and many more are still remembered today. The local press (Westfalenpost, Rundschau and especially the Hasper Zeitung) comprehensively attended to these activities. Probably the band would have recorded the first album with this instrumentation as well, if not Hermann Quetting (former Chris Braun Band, Dortmund) had joined them in October 1971, influencing and shaping the style with his huge collection of keyboards.

After completion of the album the name “Kapelle Elias Grobschnitt” was shortened to “Grobschnitt” due to the pressure from the record-company, since this version allegedly sounded better and could benefit international sales. In consequence, Grobschnitt including a keyboarder was “officially” active under this name since the spring of 1972… Also the in the meantime well-known notorious old poster from Charing Cross was dug out again, renamed and slightly “deactivated” to serve as a bridge to the new band and the new name.

Since its release in April 1972 the album “Grobschnitt” (Metronome/Brain 1008) is considered to be the debut of the formation out of the Westfalian town called Hagen. But it doesn’t comprehensively reflect its full musical spectrum of that era. The tracks from this album were -as known- especially arranged and shaped with Hermann Quetting for the LP in late autumn of 1971. But already in spring drummer Eroc had started professional recordings at the THG assembly hall, which he continued throughout the whole year. In August for instants he recorded the whole program of Kapelle Elias Grobschnitt in this place. All songs were played live and subsequently Eroc refined and edited the tracks in his “Heimstudio” (home studio). During the course of this activity several tape-machines, NF-generators, sound-generators, echo-machines and his legendary self-built “desk” were applied. At the very beginning of the CD a short section from his band Wutpickel from summer 1970 is to be heard, for the voice of “Ölberg” he spoke on a tape-recorder, which was played back at lower speed, for the intro of Suntrip a filled bathtub was used and the finale of the Sinfonie is a special “psychedelic” version for which he conjured with everything at hand which was to be not reproducible ever since.

Fallstone and About My Town weren’t recorded later on in studio, since this would have exceeded the duration of a vinyl-LP. About My Town in particular demonstrates the teamwork of drummer Felix (on stage and during all recordings always at the left side) and drummer Eroc (right), Fallstone proves the sometimes rather impetuous singing of Stefan “Wildschwein” and this whole “first album” perfectly completes the view at the musical spectrum of the band. These early authentical recordings leave in many ways a livelier and fresher impression compared to the perfectly polished studio versions of the LP from Metronome. They show “the” Kapelle Elias Grobschnitt precisely in the fashion as they were to be experienced in those days. And not only have the first bars of Fallstone verified their nickname, which was upheld by the fans at the time: the Westfalian Santana…