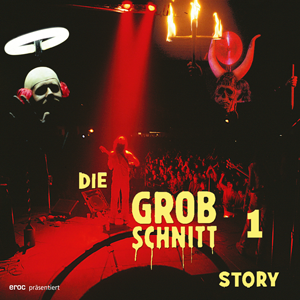 The idea for forming an electric band was generated by Eroc and Lupo in 1965 when they were classmates at school. One year later it all started off with ‘The Crew’. In early 1971 the band was reformed under the name of GROBSCHNITT. The members were: Eroc (dr, eletronics), Lupo (gtr), Wildschwein (voc, gtr) and Toni Moff Mollo (roadie). Later joining until the end of 1972: Felix (dr, perc) and “Quecksilber” Quetting (kb). On bass: Baer (1971 – 1975), “Popo” Hunter (1975 – 1979) and Milla Kapolke (since 1980). Volker “Mist” (kb) was with the band from 1973 – 1982. Eroc himself stayed until the summer of 1983 and then decided to follow his own pathway. From this point the band existed for six more years with different members for drums, bass and keyboards.

Here we are: announced by Eroc in December 1989 at the band’s farewell-concert in Hagen and eagerly expected – the “Grobschnitt-Story” is finally on its way…

We are writing the year 1994 and it’s time to tell a story – the story of a band and the history of their time. For those who took part in it, and for the ones who never had the chance to do so and would give anything to experience how the spotlight’s turned on for the legend among the bands of German Rock History.

They were the best. They were indescribable. Never again a non-commercial German band managed to crowd the places

with audience like GROBSCHNITT did with their unique performance combining music and theatre, adventures and fun, and dream and reality. They were compared to The Grateful Dead, to The Mothers Of Invention and even to Genesis and to Yes. But they were much more than them. They were a true fan’s band; musicians always touchable for everyone. Which one of the bands nowadays is able – after performing for 3 hours (if at all) on stage – to go on shaking hands, signing autographs and replying to each question off-stage for at least another hour? For GROBSCHNITT it was all a must-have, no matter if it was in the Westfalenhalle, or in the Philipshalle, or at the Gruga or in one of the countless smaller concert halls and gyms in the German outback.

Especially performing in the backwoods was one of the secrets of their success. The band drove there to play for the people, so the people didn’t have to drive to the big cities to see the band. And so the fans were able to identify themselves with their idols because they let “it” happen for them next door. Each time the wild bunch of 6 musicians and 12 Roadies roared their trucks throughout the countryside 80 to 100 times each year, dogs were taken in and children were put on the chain. Church councils resolved, district councils resigned and quite a few voluntary fire brigades still dedicate their anthems to the still smoking stages GROBSCHNITT had left behind.

Never after GROBSCHNITT was there such an excessive spectacle of heavy-metal, electronics, improvisation, meditation, optic and ecstasy like “Solar Music”. Never before and never after a German rock fairytale gained such popularity like “Rockpommel’s Land”. Whether it was a dentist or a druid, Zappa or circus horse, politician, police-officer or professor – GROBSCHNITT made everyone show up. Godfather himself appeared as well as the devil.

Already in 1972 GROBSCHNITT featured their own „Sahara-Show“. Already in 1975 GROBSCHNITT brought the first “Laser-Show” on stage: all roadies lined up reading “Bild Zeitung”, a German yellow press magazine. In German a reader is called “Leser”. So it truly was announced as the Leser-Show…

Toni Moff Mollo, evergreen in his most representative role as Ernie, the little boy with the big experience in “Rockpommel’s Land”, which was one of the show’s climaxes for more than thirteen years. Also unforgottable: The flock of bedouins of the “Sahara-Show” which not only covered national stages with artificial snow but also drove caretakers mad for good and for not less than eight years.

The Old Magician opening each show, the Mercenary Show, the Balli Show, the Stony Heads, the Mythical Creatures, Big Maraboo in Rockpommel’s Land, the green and red fire and the Swordfighters at Solar Music, they all were part of the performances like Space Rider, the Sniffer, the Illegal Judge and the Kissing Cardinal. Holy Santa in a flaming inferno (Osnabrück 1978), the bomb from Hattingen (Open Air 1974), Toni’s Ski Jumping, the Duck Killer, Wildschwein as a wild boar and Lupo as Miss Piggy in Schweine im Weltall (1983) – lovingly prepared jokes and roles, but quite often also spontaneous improvisation between the band and their audience.

GROBSCHNITT was the first German band which despite prohibitions consistently used fire, artificial fog and bombs on stage. GROBSCHNITT was the only German band to develop light techniques and the complete P. A. system based on their own ideas keeping it always up on the highest technical level. There were no compromises made either in technical or in personal regards. Everyone in the band was a first class professional in his working space. And they always were a big family. Musicians and roadies drank and drove, laughed and suffered side by side, always prepared to give their very best to win people’s hearts. They did it just for fun and never for the fee. And that’s exactly the fact which made this band unbeatable in any situation.

This new issue of The “Grobschnitt-Story” was remastered with the latest technical achievements and now finally transfers the recordings of our long history how it always was intended.