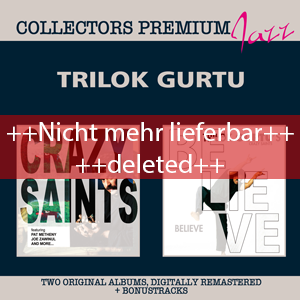 “I don’t like the term ‘world music.’ It has become a curse word that is only used to categorize music with non-western cultural elements. Every kind of music is either world music or not. There is really no need to use this word, as long as musicians from Mars have not entered the scene.”

Confronted by the media, which subsumed almost everything improvised under the jazz category as well as everything that cannot be categorized as world music, he developed his own comprehensible aversion against this kind of classification. If Trilok Gurtu does label this phase documenting both albums as Bollywood-Jazz, he would do so with a wink.

When Crazy Saints was released, he announced “’No more east or west!’ Loathe when exotic spices suppliers take over the growing musical ethno-supermarket.
Indian culture as sounding curry? No thanks.

After the release of his 1988 debut Usfret, Gurtu foreshowed he would not repeat himself, but that he wanted to create something different. Crazy Saints once again presented his mother, who was a well-known singer in India. Pat Metheny, Joe Zawinul as well as two world-renowned Jazz names also appeared on the album, undoubtedly attracting additional attention. It was key that he had found a like-minded aesthetic in a musician such as Zawinul, who stood on the idea of using global resources, feeding on music with a personal touch. Gurtu was interested in this approach, jazz or not.

Believe marked the next step. Crazy Saints is the name of a working band, having found a few musicians similar to him. Frenchman Daniel Goyone (expert in Indian, African and South American music- it is no coincidence that he was named as the personel constant and a musical brother on the first Gurtu albums.), American David Gilmore and Chris Minh Doky, a New York-residing Dane of Vietnamese descent. And what do they play? Jazz, rock, rock jazz, and funk traversed by Indian, African, and Brazilian influences and a few other genres. In other words, a genre that one must interpret for himself.

Asia, Africa, North and South America, Europe. An intercontinental bridge-builder.
Even as a young musician in Mumbay (present-day Bombay), non-Indian music met his ears: Hendrix, Cream, Otis Redding, Sly Stone, John Coltrane, Hermeto Pascoal, African music and European classics. Gurtu was more prepared for his first Rendezvous with a western colleague than the other way around. It was an experience that only encouraged him to go his own way. He does not want to be depicted as an Indian musician, but rather as a musician who originally comes from Indian.

The albums are grasped as chapters in a book with an open end. Crazy Saints and Believe document a changing period, in which Gurtu newly orientated himself. The bonus tracks (a live recording from Radio Bremen, recorded between both studio productions) particularly prove, that jazz during this particular time was still a crucial component of his music. This changed in the time that followed. He feels the often testified sincerity of jazz as the opposite, as constricting. Lastly are the chapters that stand for an ongoing search for music, which embraces its world. Gurtu would love to be identified as a world citizen, as a mediator. His unique integration of drumsets and percussion is the expression his self-understanding: Neither a drummer nor a percussionist, but a musician. He is open to anything. His Martian colleagues are more than welcome to come.
Karsten Mützelfeldt