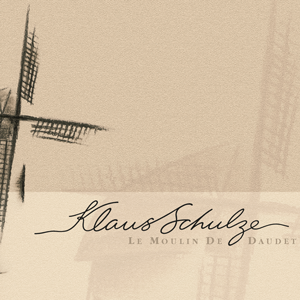 “The trademark of epic poet Klaus Schulze is still distinctive even in the 21 short and very short pieces… Ready for an Oscar.” („Keyboards“/ Germany, July 1994)

“Le Moulin De Daudet”, originally released in 1992, was a commission for the French-Arabian director Samy Pavel. Klaus invited director and producer to visit him in his studio. For one week they cooked, ate, drank good wines and Klaus played the soundtrack directly to the rough cut of the movie.

Another pearl from the huge Schulze cosmos.

“Le Moulin de Daudet was a commission. In 1979, French-Arabic director Samy Pavel had already used my composition ‘Friedrich Nietzsche’ [taken from the album “X”, 1978] as a requiem for a film on the popular French singer Claude François who had died very young. When he intended to make a film about the French author Alphonse Daudet, he again approached me, only this time he wanted to use original music and not a song taken from a record.

Samy Pavel visited me in my studio and stayed for a week. And the producer of the film came from Italy, too. By the way, this was Fabrizio Uderzo, brother of the “Asterix” artist. He arrived with his Italian specialities – olive oil, Parmesan cheese, wine, everything of the most excellence – and he prepared a meal for all of us over there in the kitchen. Never again did I enjoy such a good meal! Then we watched the rough cut of the film, and Samy explained
what kind of music he had in mind. And I thought it was great that he quoted Frederico Fellini, the Italian film director. Fellini often had the feeling with his work that he was always shooting the same film.

That also fits for me – sometimes I feel like I’m always doing the same music, haha! Working with Samy was terrific. The music for every film scene was recorded live. He then often said, you have prepared that pretty well, that’s a beautiful theme! And I said to him: “No, I have played this for the first time, the theme just came into my
mind!” It also was a marvellous collaboration because Samy gave me complete free hand. He only expected an understanding of the film, and sometimes he said: Maybe you could add a little bit more choir here? No problem, I will do so. Then I sat down and played, and it fitted. Samy was so enthusiastic about the music that he later mixed it much too loud in the movie. I went to Paris to this film studio because of the final mix, and I said to him: “Man, turn down the music a bit! You can’t hear what the actors are speaking.” However, he wanted to have the music loud!

In retrospect, I have to say that no other director in the movie business took me so seriously except Gerald Kargl, the director of “Angst” who cut his film to my music. For me, the interesting thing about composing a score, in general, is that you need to have discipline which I do not have at all. Normally I just do what I like to do – thank God I’m able to and allowed to do that. But with movies, you must follow the director precisely. He says: This is a three-minute long scene, and within these three minutes you have to express everything! You have to get straight to the point. That is a wonderful challenge.”