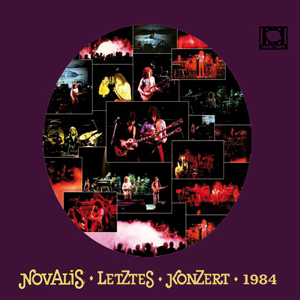 NOVALIS is the „nom de plume“ of the early romantic poet, Karl Friedrich von Hardenberg (1772-1801), and inspired the Hamburg musicians Heino Schünzel (bass), Jürgen Wenzel (vocals, guitar), Lutz Rahn (keyboards) and Hartwig Biereichel (drums) when they set about looking for a band name in autumn 1971. May 1973 saw the release of their debut “Banished Bridge” which had been recorded in English. Starting with the arrival of their second album, released in April 1975 (Wenzel having been replaced by guitarist Detlef Job), their use of German lyrics ensured the band’s constantly growing up popularity. With their classic “Sommerabend” NOVALIS earned their nationwide breakthrough in 1976, followed by their accomplished offerings “Brandung” (1977), “Vielleicht bist du ein Clown” (1978) and “Flossenengel” (1979), which were all recorded with their new vocalist, Fred Mühlböck.

The “Neue Deutsche Welle” (Germany New Wave) brought a whole new set of parameters to the German music scene in the early Eighties, NOVALIS’ traditional rock on recordings such as “Augenblicke” (1980), “Neumond” (1982) and “Sternentaucher” (1983) no longer sounding contemporary. They performed the final concert with their original line-up in summer 1984, presented to the public for the first time on this new double CD.

Only a few weeks after the concert, Mühlböck left NOVALIS, and the group’s last studio recording – entitled almost programmatically “Nach uns die Flut” (after us the flood) – was recorded by a different line-up.

Drummer Hartwig Biereichel comments on the recordings featured on “1984 Live”:

“Live cuts are always tricky. I can hear the reviewers who (still) take every new NOVALIS records apart with their extremely critical comments: there are sonic distortions, there are hisses and sizzling noises, the guitar is frequently too loud and so on, they’ve hit the wrong note a number of times – and so on and so forth…
Of course, all this is true; after all this it’s a real live recording with all its faults and shortcomings. But it’s authentic and totally unprocessed (apart from Eroc’s wonderful remastering), those tiny technical mistakes are and have always been part of a NOVALIS show. That’s what makes it alive and gives it energy.
NOVALIS were a rock band that always found it difficult to condense the sheer power of their music into the grooves of a record at the studio. On “1984 Live” we whoop it up, as can be heard on “Grenzen” and the “Schmetterlinge/Irgendwo, Irgendwann”-medley.
Following the 70s phase which produced “Sommerabend” and “Wunderschätze”, among others, NOVALIS had only three options at the beginning of the 80s if we wanted to continue to be creative as a band and enjoy our music: 1.) Continue to come up with awesome numbers, which isn’t all that easy; 2.) Copy ourselves and merely mark time; 3.) Risk new, experimental approaches which may not have gone down too well with some of our fans, a number of which were no longer prepared to follow us on this path. As disappointing as our waning success may have been back then, it’s comprehensive from today’s point of view. The titles which were new at the time include “Ich hab noch nicht gelernt zu lieben” (featuring Lutz’ intricate keyboard technique), “Cassandra” (with its wild, unbridled rock drive and Fred’s transverse flute) and “Über Stock und Stein”. This song had previously been a pure studio track – we ourselves were surprised that it worked on stage and went down so well.
“Mit den Zugvögeln” (dreamily romantic and with atmospherically tension) and “Vielleicht bin ich ein Clown“ (pretty prcise despite a number of tempo changes) hail from an earlier phase. Fred’s voice on “Nimm meine Hand” and “Bumerang” betrays that he had personal problems at that time. He quit for good soon after this concert. Still we were always in perfect harmony on stage – which you can hear because a number of titles are performed much more dynamically than their LP versions (for example “Kleinwenig mehr” with Heino’s speedy bass fingers and “Wer Schmetterlinge lachen hört”/”Irgendwo, Irgendwann”, including Detlef’s orgiastic guitar). Listen to this track with your headphones on and you’ll feel right at the centre of the stage!”