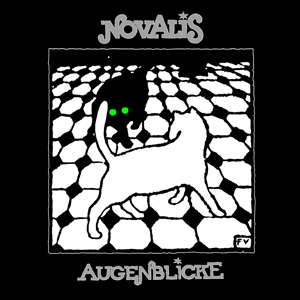 After the big success of “Flossenengel” (MiG 00652), the album “Augenblicke” (“Moments”) came up with several significant changes. Novalis’ drummer Hartwig Biereichel recalls: “The album ‘Flossenengel‘ was a concept album with singular tracks that were yet intertwined in one complete work of art. We were a progressive rock band that used to roll out the long passages of a song consciously. Nonetheless we also had very compressed songs that have been much fun, too. That was the point when we noticed that for us the time of long improvised tracks was over. We simply felt that we wanted to become more catchy – and you can hear that on the album ‘Augenblicke’: concise coherent songs that were perfect for airplay.” And in another aspect the album was a plunge in at the deep end for Novalis: the members of the band had changed their working method radically. But the experiment turned out successful as Hartmut Biereichel explains: “When we had started the band in the 70’s, at first we only improvised. We kept certain elements that we developed into the songs. At the end of that decade we stopped working like this. Like many other bands every one of us recorded demos at home alone. Those were then played to the other musicians, and after that we decided what parts we would keep or skip. That was a completely different process.”

Maybe that is why the album ‘Augenblicke’ has lost the melancholy and the severity of the past. It emphasizes the rock parts, sounds more direct and pays more attention to the songwriting qualities of each band member. As Hartmut Biereichel puts it: “You can hear that our prog rock phase is coming to an end. Lutz Rahn and Detlef Job had become the most important songwriters – next, of course, to Fred Mühlböck in his extremely unconventional way to compose and write lyrics. There was little group work. The demos that were brought to the studio represented the product of its creator. ‘Danmark’ for example is a distinct Lutz Rahn song whereas ‘Ich hab noch nicht gelernt zu lieben‘ is typically Fred Mühlböck . We allowed ourselves a vast creative space so that everybody would be able to come up with his own ideas.” Still, the result sounds very homogenous. And if certain contrasts and corners shine through that represents the internal state of the band at that time. “We came from very different musical directions and on this album we tolerated that for the first time. Bands only develop when they try new paths. Clinging to the past and old recipes is wrong. You have to stay open for new ideas, otherwise it will soon get boring.”
Thus the album “Augenblicke“ sounds thrilling and alive – even 30 years after its first release!