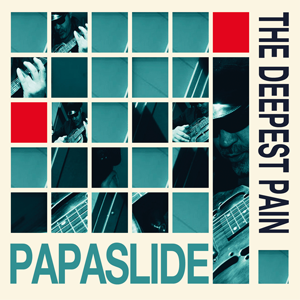 Rune Nordvik akà PAPASLIDE is a well-established blues musician from Norway. He is curelessly infected with the blues virus since his parents gave him his first guitar as a Christmas gift at the age of 14 and at the latest as he discovered his all-time favorite Johnny Winter some little time later.

His third album „The Deepest Pain“ does not only contain a lot of his love for the bluesrock legend Johnny Winter, who sadly passed away in 2014, in form of three cover songs, but also proofs his musically wide range. Next to 7 own compositions you can additionally find a Mark Knopfler and an Albert Collins cover.

Seen as the hottest blues act from Scandinavia PAPASLIDE knows how to combine different shades of music into a harmonic entirety. His blues is colored with rock, folk, swamp, soul, voodoo and psychedelic sounds, which create a unique listening experience in “The Deepest Pain”.

On a long past tour Rune Nordvik met the twofold Grammy winner Roy Rogers. The slide guitarist from California (known for being the producer of John Lee Hooker’s masterpiece „The Healer“) reckoned the Norwegian to be a rough diamond, and during joint sessions he introduced him to the secrets and techniques of the bottleneck.

In 2009 Rune released the first self-produced album by PAPASLIDE. Especially the Scandinavian critics loved it. The Scandinavian rock radio stations played “You Can’t Hide“, and they liked the tune „Blues For Breakfast“ a lot.

“What Are We Livin’ For“, the second album, is being released in 2011. In contrast to their debut PAPASLIDE are sounding more mature, more down to earth and have intensified their rock facet. With the title track they also have a radio hit at hand. The slightly mystic and weird video by Sveim Heimvik has transferred title and atmosphere into impressive pictures.
2015 follows „The Deepest Pain“, which will continue raising even more attention for Runes blues in this tradition.