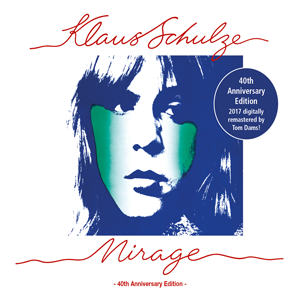 The LP “Mirage“, as predicted by Record World, “will establish Klaus Schulze as one of the most outstanding electronic music composers. Schulze‘s flexibility in voice and and the final product certainly show the bizarre winter scenery, especially the epic piece “Crystal Lake”, which is loved by Schulze fans all over the world.

„Mirage“ had been digitally remastered in the 80ties. Obviously, this version was taken for every further release (incl. the releases on Revisited Records/SPV and even the first re-issue on MIG Music). That is why MIG Music gave the project  into the proven hands of Tom Dams (Solar Moon System), who is Klaus‘ trusted sound engineer since 1998, to finally restore the material. Now MIG Music is able to present a digital version of „Mirage“ which is as close to its origin as possible. Unfortunately, it was not possible to provide the original material for the bonustrack, but due to its historical
significance we did not want to throw this track out.

For many fans “Mirage” is considered to be one of the most important Klaus Schulze works of the 70s.