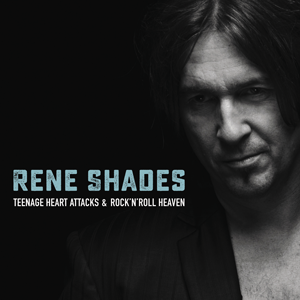 For his first solo record the bass player of the hardrock band Pretty Maids returns to his roots in rock, pop and country. Together with Hans-Martin Buff (Prince, Scorpions) and Flemming Rasmussen (Metallica, Blind Guardian) René Shades recorded twelve diverse songs about dreams, reality and seizing the day.

The album title “Teenage Heart Attacks & Rock’n’Roll Heaven” is rooted in Shades’ childhood: “When I was young and started playing, this was what I was dreaming of,” he explains. With his band Pretty Maids, the Dane is known in the hard rock world, but still maintains his broad musical horizon: “I always had a love for rock, country and pop music. I wanted to mix those elements together and get far away from what I was doing with Pretty Maids,” the guitarist and singer explains. The twelve songs result from that variety and range from rock over pop to country and folkish sounds. The positive attitude towards life and the chance of living in the moment is the record’s thread.

A great debut from the member of the Pretty Maids, which is in no way inferior to the releases of artists like Kid Rock, Creed or Slash.