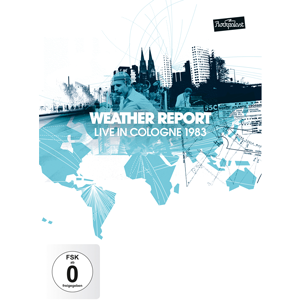 by Brian Glasser (Author of ‘In A Silent Way: A Portrait of Joe Zawinul’)
Beware! This Double-CD or DVD package you’ve just acquired is dynamite, and it will detonate when placed in a tray and read by a laser.

The Moment In Time

The year is 1983, and Weather Report are out on the road, in Europe for the first time in their new incarnation. Pastorius? Erskine? Robert Thomas? All are Mr. Gone. Big shoes to fill, and who’s stepped into them but a bunch of kids hardly anyone’s heard of. Hell, even Joe and Wayne hadn’t heard of a couple of them when they hired them less than a year earlier: it was the new drummer, Omar Hakim (23) who had recruited bassist Victor Randall Bailey (22) and percussionist Jose Rossy, because a batch of US gigs were imminent and Zawinul understood that if the sidemen were comfortable with one another, then things would be cool, “because me and Wayne, we can play with anybody …..”.

The band had subsequently gone into the studio to make the album ‘Procession’, and a new edition of Weather Report was officially born – the last edition, as it turned out, but very far from the least of the many. (Were there any ‘leasts’, actually ….?) Hakim recalls that when he first joined – and remember, he was young enough to be one of Joe and Wayne’s sons, and they were his musical heroes – “I was initially insanely nervous about the fact that there wasn’t much discussion about the music. I kept thinking, ‘When are we going to talk?’. There was a lot of eating and drinking and hanging out; and then I realised that that was the rehearsal: it was the conversation that began from hanging out together that finished on stage. So there was a lot of trust there – they were saying, ‘We trust your choices as a musician – we don’t need to tell you what to play.’” That trust was vindicated by the music that is created at this concert in Cologne, recorded by German TV (danke schon!).

You only have to watch Zawinul walking on stage and taking up position behind his flotilla of keyboards to know that what’s coming will be major – he’s the opposite of nervous, plainly super-confident that the band and the music he’s about to unleash on the audience is, in his terminology, ‘going to kill them’. Out comes a concoction of his weird and wonderful sound samples; in come the cymbals, setting up a smouldering groove; and we’re into the mighty ‘Procession’. The piece introduces the genius that is Hakim: power, precision and delicacy intermingling in a way that, by rights, should not be possible. The serpentine melody gets cranked up each time it goes around; and by the end the music is no longer smouldering, it’s a four-alarm fire. One of the great show-openers!

Indeed, Zawinul’s composing had been rejuvenated by the individual and collective potentials of the line-up and the band already had an almost entirely new book, made up of material not only from the recent album but also from the next one (‘Domino Theory’), which was still some way from being recorded. So after the helter-skelter bebop outing ‘Fast City’, wherein Shorter’s fearsome tenor solo brilliantly evokes frenetic urban life, come two pieces making their debut: ‘The Peasant’ and ‘Db Waltz’. Zawinul’s Eastern-sounding synth tones on the former remind us that its original title was ‘Singapore’. Check him out simultaneously playing one keyboard on his right and one on his left – how does his brain manage to face in opposite directions at the same time?! Hakim steps out from behind the kit to share percussion duties; while Bailey’s contribution is particularly apposite. (Throughout the gig, he displays the perfect blend of discretion and valour for someone taking on the challenge of being Jaco’s successor.)

Jose Rossy leaps in the air excitedly at one point near the start of ‘Db Waltz’ and it’s easy to understand why -the piece ranks as one of the group’s most joyous. As a Viennese, it’s not surprising Zawinul had an affinity for waltzes – Boogie Woogie Waltz (from the 1973 album ‘Sweetnighter’) was a perennial favourite at gigs until his death – even if his take on the form sits some way to the left of Strauss’s.

Next comes a test run of ‘Blue Sound Note 3’, the components of which are assembled in a different order to the studio version recorded some months later. It’s an intriguing alternative; and here, it comes across more as a ballad (albeit an occasionally eerie one). Then there are a couple more tunes off ‘Procession’, plus a percussion feature.

So we’re seven or eight tracks and over 70 minutes in, and only one composition predates the existence of the new-look line-up! It was great value for the audience, being treated to so much new material, but the inevitable trade-off was the dropping of some much-loved fare. The solution to this comes at the start of the second CD: a medley of ‘greatest hits’ that manages to scamper through the band introductions (Shorter is MC, as usual) plus six songs in roughly twice as many minutes – a whistlestop tour that culminates in a truncated but rousing version of ‘Birdland’ to close out the set.

Naturally the crowd is going wild; and naturally there’s an encore. It begins with the nightly dialogue of the gods, the Shorter-Zawinul duet, freshly minted each time. The band comes back on for a barnstorming ‘Where The Moon Goes’, which includes the good-humoured ‘duel’ between Zawinul’s keyboard and Hakim’s drums, which ends with all guns blazing, before the ensemble take the piece home. Shorter is by now perspiring freely, Bailey, Hakim and Rossy look a little fatigued if high on endorphins.

Extraordinarily, when Zawinul comes out front to salute the audience he looks as if he’d been involved in nothing more taxing than reading the Sunday papers for the last couple of hours – he shows no sign of exertion at all, having just played his socks off!

What a feast the concert was for the Colognials that night, and is now for us all these years later. As Omar Hakim has said: “Weather Report wasn’t typical instrumental music: there was Europe, Africa, jazz, blues, Latin, -all inside one thing. It was true world music….”. Here’s to that!